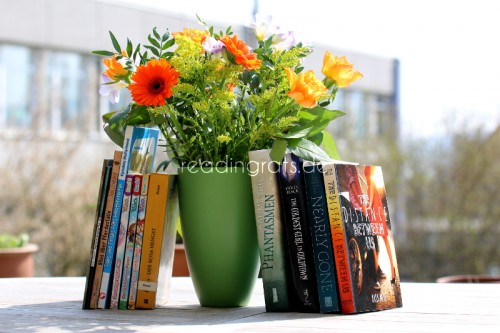 Apparently, my new camera is actually too good. The resolution is so high that the pictures get fuzzy when I scale them down for the posts. So please click to enlarge; they look much nicer that way. Does anyone know how to solve the problem without having to change the camera settings?

Talking about my new camera: you have no idea what I went through to get that thing! The retailer messed up twice and I wouldn’t have it yet if it weren’t for a long phone call. It basically took them all of March to ship it to me. But it’s gorgeous and I adore it. Have I mentioned that it has freaking WLAN?! You can remote control it with an app on your mobile. So cool! Naturally, it was quite expensive but I wanted a new camera for ages. I’ve outgrown my beautiful EOS 1000D a while ago and it’s literally getting senile anyway. Ever since we strolled through Vienna on a rainy day in March 2013, it has some kind of error and frequently forgets that it has an SD card to which it’s supposed to save the images. It’s my own fault for not taking care of it properly that day. After all, it survived several wet holidays in Ireland and the UK. The new one is waterproof though I won’t test that anytime soon. I’ve been saving for the last couple of years but could never bring myself to spend that much money. When I finished my bachelor thesis, I decided that it was time to reward myself – although I didn’t know whether the thesis was any good. Turns out it was and now my new camera answers to the illustrious name of Katniss EOS-70D-een.

During the first week, I spent several days at Ric’s in Munich, which I always enjoy because we have so much fun and she makes the best salad dressings in the world. Naturally, we went to every bookshop on our way, geeked out at the Item Shop (I so have to get my sister a plush Adipose for her birthday! She’ll go nuts!), talked about books and blogging, argued about her way of sorting books by colour (Soulless is grey!), took turns hiding under the blanket – Ric while watching the first episodes of the second season of Game of Thrones (although she actually didn’t have to, but she said she would), me while watching the boys’ edition of Germany’s Next Topmodel (oh dear God, Fremdschämen deluxe!), watched many Sailor Moon episodes, which involved a lot of hand waving and bursts of laughter, and of course we got ‘a couple’ of books at the awesome book fleamarket.

The best part, however, was our cultural tour/blogger meeting with Steffi and Bou, who functioned as our guide for the day and provided some background information to epochs and the stories behind some of the paintings. That might sound a little boring, but I never had so much fun visiting art galleries! We just loved making fun of some of the paintings, especially of the quite unrealistic boobs, met Thusnelda and Judith, sat in front of not only one but three van Goghs with the glassy eyes of Doctor Who nerds, and couldn’t get enough of Monet’s Water Lilies (well, Bou and I, that is). After we were done with both the Alte and Neue Pinakothek, we turned to architecture. After a short stop at a church which was ugly on the outside but a radiant beauty on the inside, we went on a tour of the Residenz. Pretty much right after we walked through Anastasia‘s ballroom, Bou and Ric decided to buy the place – or rather that they already owned it. The rest of the tour, we spent breaking down the rooms and discussed our makeover strategies. We were constantly cracking jokes about the infinite number of anterooms and decided that the gallery would become our blogroll. I, for my part, only wanted one single ‘room:’ the stunningly beautiful Allerheiligen-Hofkirche, which was destroyed during WWII but reconstructed. Why I wanted to have a church? Well, it’s entirely out of brick stones. Beautiful, gorgeous brick stones. Oh, and then there was our creepy relics room experience. Well, we thought that we were looking at some more kitsch until we realised that there were bones inside – and a dead child or something. After our fun tour, we grabbed dinner and then it was already time to split up but we swore to get back together as soon as possible. You know you have found true friends when they not only accept that you were running around with two pencils in your hair all day, but actually think that it’s pretty cool.

Oh, and I actually got some reading done! However, March was a month of ups and downs. I’d been very enthusiastic in the first half but since none of the novels could actually blow me away, I suddenly lost my motivation – right in the middle of The Bone Season.