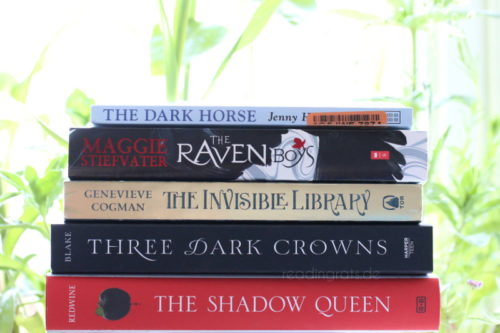 On my TBR since: 2017
Background: Jenny Hughes was one of the PonyClub regulars. So far, I’ve read 14 of her books with a mixed track record ranging from one to five star reads. There are a couple of books that hadn’t been published by PonyClub like this one. Since I do really like most of her older work, I had to get it.

On my TBR since: 2016
Background: I noticed this one when a couple of friends read and liked it. The concept sounds so intriguing, I just had to have it. Books about books always pique my interest.

On my TBR since: 2016
Background: I remember being torn about getting this immediately or waiting for the paperback or maybe not buying it at all. And then I saw a picture of the endpapers’ map and I totally accidentally couldn’t get it into my shopping cart fast enough.

On my TBR since: 2012
Background: I got this one during my semester abroad at Eason’s Dublin. Since this was before getting into blogging, I guess I just thought it sounded intriguing and didn’t act on recommendation.

On my TBR since: 2016
Background: I have to admit, this was part of one of my excessive book hauls when I just wanted to buy books. Don’t get me wrong, I am interested in reading it. I just don’t have a special story for this one.