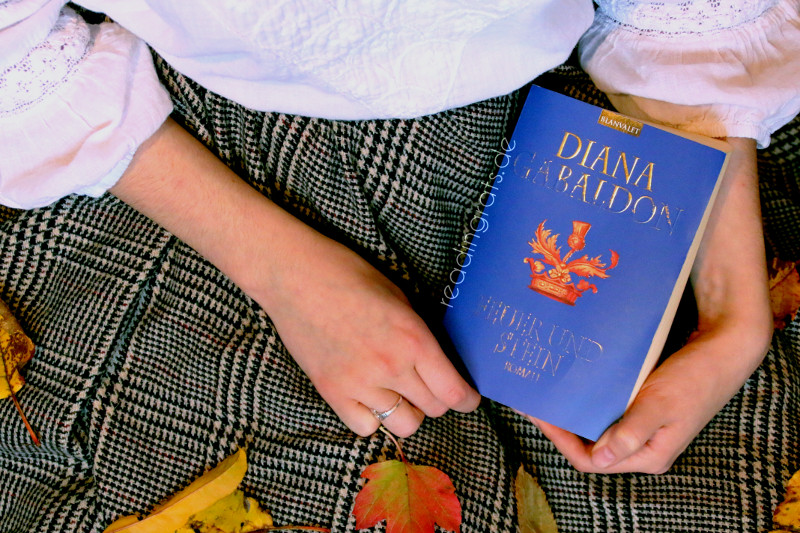 I got my German copy of Outlander at a large secondhand book sale in March. Back then, I had only heard of the series once or twice but didn’t even know what it’s all about. First and foremost, I bought it because it was cheap and I remembered some bloggers talking about it. That was quite enough to recommend it to me. Soon afterwards, I found out that there would be a TV series and became mildly excited. Still, the book ended up on my TBR pile.

In May, I started my internship at a publishing company and suddenly everyone around me was talking, no, raving about the books. They couldn’t wait to get their hands on the upcoming sequel. I became quite curious and watched the first trailers to get a feeling and it totally seemed to be my cup of tea. You would think that this was quite enough to make me pick up the novel. Did I start reading? Well, no, of course not!

With the start of the TV series, some fan videos popped up in my Youtube timeline and I started watching them. I don’t really mind being spoiled by such videos, in fact, I enjoy them very much and started watching 99% of my series only because of said Youtube videos. They mostly consist of bits and pieces anyway and make me want to find out what it’s all about.

Still, I knew I wanted to read the novel first. Well, at least that had been my plan until I stumbled over this perfection below. Gosh, it’s so awesome and has the most haunting music ever! Take Us Alive by Other Lives is so beautiful, it will be my personal song of this autumn. It makes me want to walk through autumn woods glistening with rain and dream myself away to Scottland.

In case you’re afraid of spoilers: it’s pretty much a trailer for the first half of the season but doesn’t reveal much more than the official trailers and the book blurb.

I couldn’t help myself and ended up watching the first couple of episodes, got a really bad conscience and picked up the book yesterday. I finished the first three episodes and now I have some catching up to do before I can continue watching. That is, if I manage to stick to this plan.