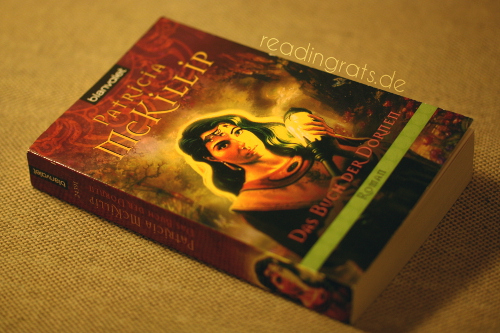 Deep inside a palace on the edge of the world, the orphan Nepenthe pores over books in the royal library, translating their languages and learning their secrets. Now sixteen, she knows little of the outside world—except for the documents that traders and travelers bring her to interpret.

Then, during the coronation of the new Queen of Raine, a young mage gives Nepenthe a book that has defied translation. Written in a language of thorns, it speaks to Nepenthe’s soul—and becomes her secret obsession. And, as the words escape the brambles and reveal themselves, Nepenthe finds her destiny entwined with that of the young queen’s. Sooner than she thinks, she will have to choose between the life she has led and the life she was born to lead…

I know, I know! That cover is awful! At some point, all high fantasy novels published in Germany got such cheesy covers. And, to be honest, I somehow … well, like is not the right word. It’s just that in my head, those covers are irrevocably connected to high fantasy and somehow, I always end up with them. But let’s just ignore the cover for the content makes up for it a million times over.

I can’t remember how I first learned about this novel. I can’t remember what made me buy it. However, I remember that I ordered it at my local bookshop one early summer shortly before I went on holidays in France with my Mum and my sister. I remember, because I started this novel when we hit the road and couldn’t put it aside. I read it while we drove through Germany, I read it at that strange and blazing hot hostel in Freiburg, I read it on our way through half of France, and I finished literally the second we arrived at the campsite in the Gorges du Chassezsac. It was the magic of the novel that glued me to its pages. Since then, including this one, I reread it three times.

This is a tale of ancient legends come to life on the pages of a book written in a peculiar alphabet of thorns, a tale of people who seem to have nothing in common but are bound together by destiny, a tale of magic, power, and love for both YA and adult readers.

Like many high fantasy novels, this one is told from the point of view of several characters, most of them in their teens.
There’s the orphaned  and immensely talented translator Nepenthe, a protégée of the gigantic Royal Library of Raine, a place that makes the hearts of readingrats leap for joy. When she receives the mysterious book, she can’t help but keep it and soon becomes obsessed with the ancient legend that is buried in the thorns. There’s Bourne, a young nobleman who was sent to the school of magic by his uncle, who is intent on planning an uprising and wants to use Bourne for his cause. Bourne falls in love with Nepenthe but becomes increasingly anxious when the thorns start to take over her life. There’s the reluctant young queen Tessera, who has to carry the weight of the Twelve Crowns on her small shoulders. No one deems her fit to rule, but Tessera is intelligent, strong, and has some power of her own. There’s the ancient sorceress Vevay, who is desperately trying to keep the kingdoms together. However, she is blinded by her countless years and  neither expects nor foresees the events that are about to unfold which will challenge the further existence of Raine. And of course, there are Axis and Kane, the Emperor of Night and the Hooded One, two mysterious figures of ancient legend.

I came to like all of the main characters, some more, some less. Still, I never felt like I truly got to know them – but that is actually part of why I love the novel so much. McKillip’s elaborate writing style of pure magic creates a dreamlike sphere that keeps a certain distance between reader and characters. Furthermore, the characters are all rather passive, well, with the exception of Axis and Kane. Don’t expect them to fight epic battles or go on endless quests. It’s more of an intellectual adventure, a journey of the mind, a tale of finding oneself and coming into one’s own. 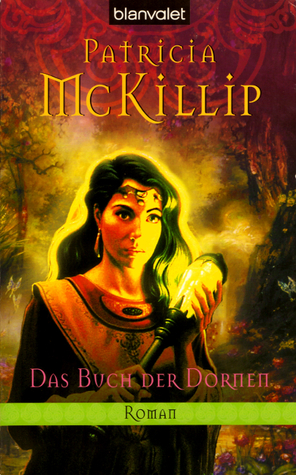 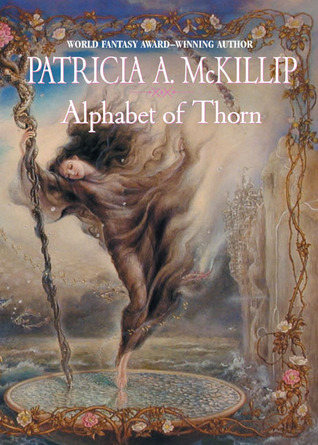