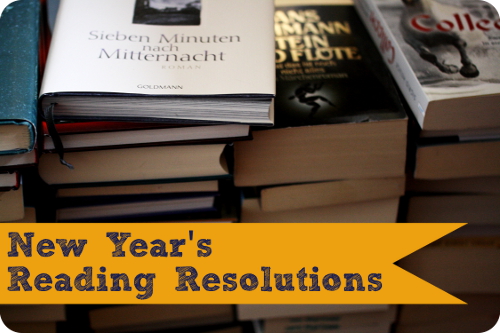 First, I wanted to let you know that I’m currently writing my bachelor thesis which I have to hand in in February. This means that I won’t have much time for blogging. Still, I’ll try to give you a couple of posts although I don’t really see it happen right now. I’m sorry, but I will be back soon.

And in case you’re wondering, I’m still counting books. I just have too many. Nevertheless, I’ve got most of them by now so expect an update to the book census in the next couple of days.

In 2013, I wanted to read 12 books a month. Turns out I aimed much (much much) too high. Instead of 144, I managed only 92, one more than in 2012. Therefore, I pledge 100 books this year. It’s probably way to optimistic again since I have no idea what’s up next for me when finishing my bachelor degree. Still, there has to be a little challenge and 8 or 9 books a month should be manageable.

Oh yes, I’m doing it again although I failed so very epically in 2013 by increasing my TBR pile by 108 books instead of reducing it by 24 as I planned to do. Still, it’s just too much fun not to participate! I pledge to reduce my TBR pile by 2 books a month and since my ginormeous pile is slowly but steadily getting to me, I’m actually planning on scaling down my hauls considerably. We’ll see how long I’m going to stick to this resolution … 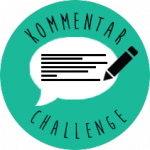 A couple of my twitter/blogger girls, namely Bou, Crini, Rishu and Ric, decided to make up a little challenge after Bou complained about current commenting habits. Basically, we don’t do it often enough and there are too little fruitful discussions in the comment sections of our blogs. And how are we going to change that? By commenting the hell out of us on other blogs to get some routine, incite said discussions and hopefully establish more close ties with our blogger colleagues.

In order to fulfil the first two challenges, I decided to create a new system for my reading lists. In the first half of 2013, my old lists worked pretty well for me but then I got lax and everything went a little crazy so I didn’t even bother to write posts about them. I really want to change things to how they were so here is my new system: