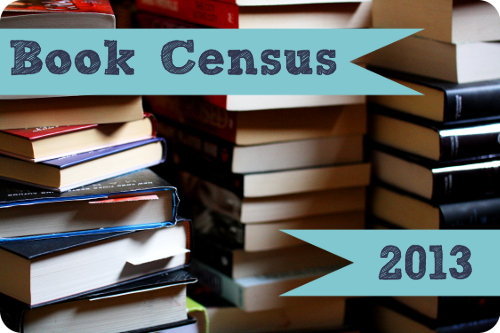 I hardly dare to tell you that I actually don’t know how many books I own. On the other hand, you might have noticed that by now. I know this sounds completely crazy. It is crazy. And I do hate it so I’m going to change this today – or at least I’m going to try.

You might ask yourselves how this is even possible. The main problem is that, as much as I love reading, I love collecting books even more. There’s just something about holding them in my hands and looking at them being all gorgeous on the shelves that kills off every spark of reason when I’m in a situation that could possibly result in me getting more books. Yes, I’m a book-buying addict. Big time. However, one of my resolutions for 2014 is to scale down my hauls. Not because I don’t want to get more and more books, but because I’m totally running out of space. It doesn’t help that it’s almost impossible for me to part with books. I even tend to hold on to those which I didn’t like, which, let’s be honest, is a total waste of space. Still, …

This, by itself, wouldn’t necessarily have ended in me losing track of my books. But when I started using Goodreads excessively in late 2011, I also began to neglect maintaining my Excel lists. So while I was adding all the new purchases to my Goodreads shelves, I failed to add the newbies of the past two years to my Excel lists. Worse, Goodreads didn’t have most of my German novels in its database and although I keep adding them, there are still quite a few missing. As a result, I have an Excel list with all the ‘old’ novels, which falls short in the newbies department, and a Goodreads list with all my newest purchases and the few e-books in my possession, but which is far from complete when it comes to my ‘old’ novels. I completely and utterly lost count, which is not a hard thing to do considering that I own … well, something about 1400 books (GR: 1407 including e-books, Excel: 1424 excluding e-books). So now I have to get both lists up-to-date.

Since I don’t have any plans for New Year’s Eve, I decided to spend the whole day sorting, counting, and reshelving books in order to put things straight. I just moved back in with my parents for the next couple of months to save the rent while writing my bachelor thesis which means that I have a spare bookshelf from my flat which will be incorporated into my already overstuffed room library. Bookish chaos at its best!

I thought it would be fun to share this event with you, because I know how much you love looking at overstuffed bookshelves. I don’t know how I’m going to do this, but there will be updates from time to time over the course of this day. I’m also planning on giving you my bookish stats in a separate post when I’m done with the counting and reshelving and assessing. So let the census begin!

Well, so much for book reshelving … instead, I catalogued and sorted my DVDs with my sister. But that’s what I had to do first, since they were lying on the floor where I now want to put my books. It just took so much longer than I thought it would. But now they are finally where they are supposed to be and now I can start clearing out and remodeling my biggest shelf. But first, I need to find some pliers …

I’ve been very busy these last two hours. I cleared out most of my red shelf, looked for all my non-horse-hardcovers (hopefully I found them all but I’m not so sure), and put them back on the shelf to get an overview. Then, I started to remodel and clean the other half of my shelf so that the shelves will be on the same level, which they weren’t before. 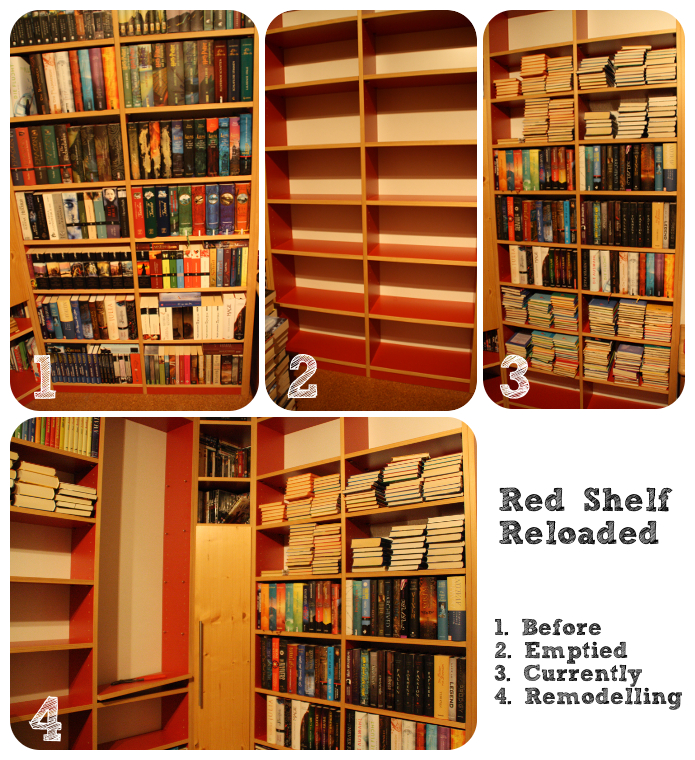