I’m a book-buying addict, I’ve always been. I tend to buy more books than I will probably ever read and yet what happened in 2013 went far beyond my normal standards of crazy. I’ve never bought so many books in the course of one year before and I’m not even sure why I went over the top. I blame part of it on getting involved in the book blogosphere: suddenly, I was made aware of new releases, discovered new novels and series left and right and got more recommendations than I could handle. I wanted to belong, so I got some of the novels everyone talked about, or novels that were group reads. Don’t get me wrong, I love it! If it weren’t for you, I wouldn’t have read the novels that became my 2013 favourites. So here are my crazy newbie & TBR pile stats of 2013:

The reasons that account for the enormous increases in purchases are mentioned above. However, you should keep in mind that they account for additional books to my normal haul size. For example, I got ten books for my birthday; the other ten were my usual purchases. Until April, I was doing wonderfully, but then I spontaneously decided that Easter would be a great reason to give myself ‘a couple of books.’ Well, my definition of ‘a couple’ greatly differs from everyone else’s. In June, I found the whole Sieben-Siegel-Series [Seven Seals] (= ten books) by Kai Meyer on ebay and couldn’t resist. In September, I remembered that I’d forgotten to reward myself for my good grades in my exams and went on another book buying rampage. The Frankfurt Bookfair completely destroyed my October statistics and then there was Christmas.

In total, I got 184 books. However, not every book (but more than enough) ended on my TBR pile, as you can see below. 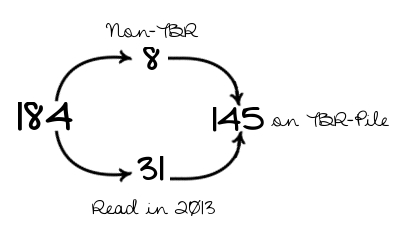 Which brings me to my TBR pile statistics. On the left, you can see how often I failed to reach my goal of reducing my TBR pile by two books a month in the SuB-Abbau-extrem-Challenge. However, I’m almost proud that I managed to get it right three times. On the right, you have the proof of what I’ve been telling you all along: I’m the Reread-Queen! In fact, one third of the novels I read in 2013 were rereads. Here, you can see how many first reads I read each month.

Because I love statistics, I’ve also one that tells me how much time the books I read in 2013 spend on my TBR pile. It’s equally shocking and intriguing. The thing that really gets to me is that I tend to ignore novels that are older than one year. Since that’s basically most of my TBR pile, I really have to change something if I hope to ever reduce it. The unknown books date back to 2010 or 2008 and before. I started my lists in 2008 but only got the routine of maintaining them properly in 2010.