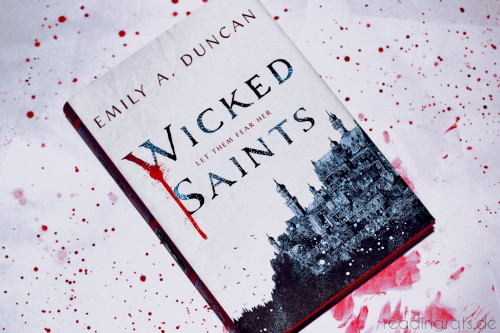 A girl named Nadya, who hears the whispers of the gods inside her head.
A prince surrounded by desperate suitors and deadly assassins.
A monster hidden behind pale, tortured eyes – and a smile that cuts like a knife.

The paths of these three characters become entwined during a centuries-long war filled with sinners and saints, magic and mystery, and a star-crossed romance that threatens to tip the scales between dark and light … forever.

Wicked Saints is certainly not for everyone but it’s 100% for me! It’s been a while since any book had me this much on edge, this excited – and I loved it even more on the reread! There’s the Eastern European inspired world (always there for that!), a complicated inscrutable magic system (I like puzzling over that stuff!), a gripping dark and desolate atmosphere (gets me every time!), intriguing characters (hello, dark-and-mysterious-more-or-less-evil guy!), and an ending that left me quite devastated (gimme that second book already!).

But first things first: This book is truly dark and should come with a trigger warning for self harm at the very least, but there’s also a lot of blood, gore, torture, and parental abuse going on. To be honest, even I, not overly affected by these topics, found some of the descriptions and concepts rather alarming – especially the way blood magic is depicted. This is why I’m surprised it is considered YA – I didn’t read and I won’t classify it as such.

Also, I wish people would stop calling this a Grisha copy cat (when in fact it’s the better of the two, being everything I oh so wished Grisha had been). Yes, there are similarities – an Eastern European inspired world, a girl with special powers, a mysterious and very powerful guy – but the power dynamics and character constellations are different, more complicated – and none of the male characters forces themselves on the protagonist or considers her their property (though it’s not a feminist romance either – I never said it’s without flaws. Grisha just set the bar pretty low in this regard). And have I mentioned that this one’s dark? And bloody? With gods and demons and everything in-between heaven and hell? Okay, since that’s out of the way, let’s get to the actual review.

What I really loved was how religion and different beliefs were handled. There’s the blood magic of Tranavia on the one hand and the gods of Kalyazin on the other. I just loved how the story plays with their structural concepts: believing in the things you are told your whole life without questioning, coming into contact with different beliefs, starting to question the things you have been told and taken for granted, trying to discern what the truth is – if there even is one. While Nadya’s world begins to crumble and she starts to question her very existence, so does the reader.

I also loved how confusing these beliefs and magic systems are. If you prefer straight forward, this one isn’t for you. There are weird unreadable prophecies and extraordinary twists that are not explained and don’t make much sense, as in aren’t understandable, but I don’t mind at all. In fact, I thoroughly enjoy that kind of stuff. After all, this is a book about divine power – or not – so it doesn’t have to make sense, doesn’t have to have an explanation, especially not in the very first book in a series. I’m looking forward to finding out more, but I also won’t mind if it weren’t truly explained.

While the story never gets boring – this book does keep one on one’s toes with people hunting each other, devising plans to kill each other, and manipulating each other which might result in death – it is also a little slow, but not in a bad sense. I actually liked the pacing, it makes it quite dreamlike. The tone is a little reminiscent of Uprooted, though it’s much darker. This world is pretty much down on its knees about to fall apart and succumb to the centuries of war. The people are desperate, the land desolate, the city ugly. Plus, it’s winter, so there’s an additional layer of cold – and it all pretty much jumps out of the pages. In case you now think this book is a horribly dire affair, it actually does have its light and funny moments brought to you by the characters.

There are two points of view, three main characters, and a couple of side characters some of which were very interesting, some of which weren’t but all of which didn’t have much to do and fell a little short. I liked Ostyia, the tiny killer lesbian with great humour, best of all. I really wish there had been more of Zaneta, because she could have been an intriguing character. I’m sorry to say that Rashid and Parijahan felt a little out of place. They didn’t really have much of a point being there, but maybe all three of them will have larger roles to play in the books to come and just needed to be established – who knows? Anyway, onto our main cast:

There’s Nadya, a cleric from Kalyazin, who has a whole pantheon of gods in her mind. She’s a little naive and narrow-minded due to her sheltered upbringing in the monastery having been told all her life that she’s the only hope for Kalyazin. I really liked the concept of her magic, her having to ask for it in the hopes the gods will hear her prayers and grant her the power she needs. They’re all very moody, by the way, which is quite funny. It felt natural that her beliefs are at first unwavering but the more she is tested, the more her world view starts to shake. She is slowly but steadily coming into her own and while she does follow a lot, she still has her own agenda.

There’s Serefin, prince and heir to Tranavia, who’s been pushed around by his father all his life because he is more powerful than the king – and therefore a threat. He has been at war for a very long time, has to deal with being half blind, and mostly seeks refuge in alcohol. He’s basically like a lost puppy; sad on the inside but tries to be a jolly good sport on the outside (while being a ruthless general – these characters certainly aren’t just black or white). He’s forced to return to the capital and he knows that he has to stop his father or his father will stop him – while having a Selection-type wife casting. Poor thing can’t catch a break.

And then, then there’s Malachiasz. Oh my. He doesn’t have his own point of view but that would totally ruin him anyway. He’s pretty much my everything: the brooding, dark and mysterious, more or less evil type. He’s a Tranavian defector full of secrets. He’s intriguing and intense and worming his way into Nadya’s mind and her heart. I liked their relationship, I only wish Nadya were a little less accepting or forgiving. But I can’t blame her, I totally get the allure. He’s also formidable with words, so no matter how much of him is revealed, he still remains a mystery, his true motives shrouded in shadows. And I fell for him all the same and can’t wait for that beautiful monster to return.