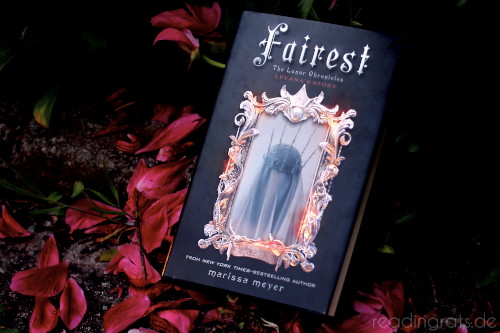 Mirror, mirror on the wall,
Who is the fairest of them all?

Fans of the Lunar Chronicles know Queen Levana as a ruler who uses her “glamour” to gain power. But long before she crossed paths with Cinder, Scarlet, and Cress, Levana lived a very different story – a story that has never been told . . . until now.

Marissa Meyer spins yet another unforgettable tale about love and war, deceit and death. This extraordinary book includes full-color art and an excerpt from Winter, the next book in the Lunar Chronicles series.

Although Fairest is set before The Lunar Chronicles, I highly recommend reading the books in publication order. Many of the characters we came to know and love throughout the first three novels are mentioned here and since they appear in the context of their backstory, it might spoil the revelations in the series. Furthermore, I don’t know whether skipping is a good idea because it contains Winter’s backstory and gives an insight into her relationship with her cousin, which appears to be an important point, hinted at when reading the first three chapters of Winter.

Since the plot is basically already known from The Lunar Chronicles and the fairytale “Snow White”, I hoped for a strong, character-driven story depicting Levana becoming the cruel and heartless queen we know from the series. Quite frankly, in the end, I was underwhelmed, although the first half is exactly what I wanted. The reader is introduced to teenage Levana, a sweet, reasonable and insecure girl cowering in the shadow of her cruel sister Channary. I pitied her. However, my pity turned into pain when she starts to obsess about and manipulate Evret. There is something manic about her and it is just so very very wrong that I had to take a break from time to time because it was too painful to read. Her downward spiral into evil began …

… or so I thought. Unfortunately, the second half lost me. Although her actions become more and more horrible, I didn’t really feel it. In her eyes, she’s doing what’s best for all. Naturally, the opposite’s the case, but with a couple of obvious exceptions, the reader seldom sees the extend and aftermath of her actions. Basically, Evret is the only affected person that has a voice, that can give an insight into the wrongness of her doings. For the rest of her actions, one has to read The Lunar Chronicles to get a picture of the situation, because it is never shown in Fairest. I was also a little disappointed that she is so very calculating. There’s nothing manic there, she’s by far not as mad, cruel and erratic as her sister, who did or didn’t do something because it is fun. In the end, I still see Levana as the pitiable lonely girl desperate to prove herself, a far cry from the cruel, heartless Levana in the series.