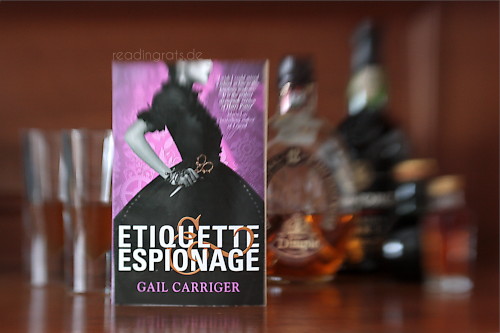 Fourteen-year-old Sophronia is a great trial to her poor mother. Sophronia is more interested in dismantling clocks and climbing trees than proper manners, and the family can only hope that company never sees her atrocious curtsy. Mrs. Temminnick is desperate for her daughter to become a proper lady. So she enrolls Sophronia in Mademoiselle Geraldine’s Finishing Academy for Young Ladies of Quality.

But Sophronia soon realizes the school is not quite what her mother might have hoped. At Mademoiselle Geraldine’s young ladies learn to finish … everything. Certainly, they learn the fine arts of dance, dress, and etiquette, but they also learn to deal out death, diversion, and espionage – in the politest possible ways, of course. Sophronia and her friends are in for a rousing first year’s education …

Welcome to the whimsically wonderful world of The Parasol Protectorate! In its YA incarnation, it’s just as steampunky, supernatural, and sublime – albeit demure. And yet, it shines with quirky characters, witty dialogue, adventurous episodes and an all-encompassing feel-good atmosphere.

When in doubt, any book in the Parasol Protectorate will thoroughly entertain you. Gail Carriger has a way with words. Her prose is just the right kind of vintage to make you feel transported into the Victorian age but modern enough to be an easy and enjoyable read. Her choice of words is delightful and all dialogue is essentially witty banter.

She also has a knack for creating a vivid steampunk setting. Whether it is the characteristics of time – traditions, social codes, et al. – or place – country homes, the moors, a flying school –, the supernatural aspect – vampires, werewolves, the aether – or the steampunk creations – mechanicals and mechanimals, dirigibles, valves, et al. – it’s lush and palpable. The Parasol Protectorate is not for nothing one of my favourite literary universes.

What’s most important though are the characters. How not to fall in love with roguish tomboy Sophronia, who’s quick in her mind and quicker on her feet – just not really when it comes to being a lady? She’s a clever one, an adventuress with an exuberant curiosity that gets her into trouble more than once.

There are her friends – some you might know from the original series – such as a teenage very blunt and abrasive Sidheag Maccon, the young inventor Vieve, the lowborn sootie Soap, plain Jane Agatha and sweet sweet Dimity, who’d rather be a lady than an assassin constantly trying to keep Sophronia in line but ultimately game for her plans. Rounded out is the cast by a couple of essential mean girls, teachers that have their own secrets and agendas, and the troubling boys from the all-boys equivalent of Mademoiselle Geraldine’s. Oh, and Bumbersnoot. He’s a cutie!

The one thing that’s not quite perfect is the plot. It’s not even boring per se, it’s just a little unbalanced. There are outbursts of sudden exciting episodes such as attacks and wild chases, but they are stretched out and a lot of page time is dedicated to getting to know the characters, establishing their dynamics, and exploring the school both literally and figuratively. That’s also fun and necessary, but the plot could have been a little more consistent, although this does not take away too much from the entertainment factor. 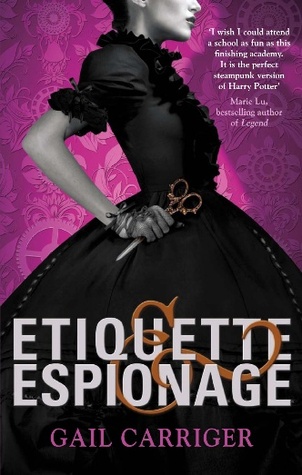