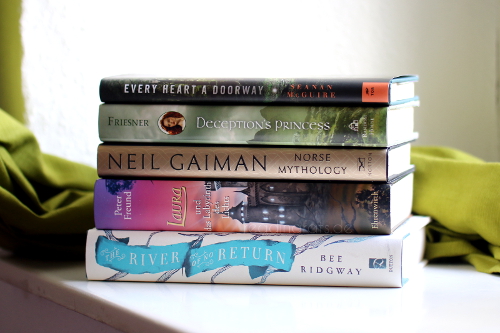 On my TBR since: 2016
Background: Um, so … I don’t really remember why I got this except for it sounding quite intriguing? Deliciously dark and haunting – just perfect for the autumn season!

Eva’s Pick: The River of No Return by Bee Ridgway

On my TBR since: 2014
Background: A gorgeous cover, time travel and a timecrossed romance – this is so down my alley!

On my TBR since: 2014
Background: The cover! The cover! A gorgeous redhead in the midst of shades of green. I would have bought this book without even reading the blurb based on that alone. It being about a medieval Irish princess is like the icing on the cake. The whole packages gives me ‘the Irish version of Merida’ vibes. Let’s see whether I’ll love Maeve as much as her Scottish counterpart.

On my TBR since: 2007
Background: Ten years. Ten freaking years. I’m a little shocked. Laura used to be a huge part of my teens. Every year, I got the newest book for Christmas and devoured it during the holidays. So why is this one still on my TBR, you might ask. Well, because the series was supposed to end after the 5th book – and what an ending it was. Mind … blown. To this day, I’m kind of surprised it made the cut because it’s one of the most unsatisfying and yet totally reasonable endings. And then this one was announced and I wasn’t all too happy about it. And yet, I had to have it. And then I did something totally stupid and skimmed through it and completely spoiled myself – developments I really didn’t like at all, so I was in no mood to read it. Unfortunately, even ten years weren’t able to make me forget all of what I read back then. I still hope I’ll be able to somewhat enjoy it.

On my TBR since: 2017
Background: I must admit that I’m not really familiar with Norse mythology. I know some bits and pieces from books, but mostly the twisted version that is the recent Marvel movies. And those I only watched because I really love Loki, mostly because of Tom Hiddleston. Oh, and of course I know about Odin’s horse Sleipnir (which is actually Loki’s son from when he turned into a mare to seduce a stallion to make sure the wall of Asgard wasn’t finished in time – or something. It’s really weird).