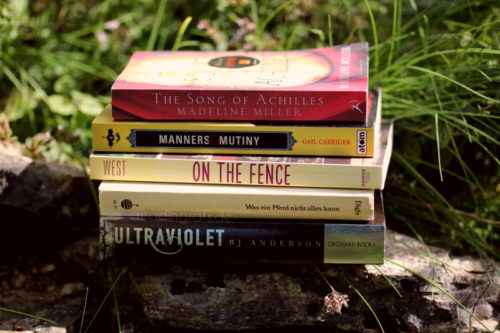 On my TBR since: unknown
Background: Unknown as in “I have no idea when or where I got this one.” I really have no clue. If I believe my book census list I started in 2008, then I must have acquired this one pre-2008, because I do have information on more or less all of the books that came after.

On my TBR since: 2015
Background: I had this preordered since I love all things Gail Carriger. However, since I actually read the first three books without rereading the previous instalments each time the next book was published – usually I always reread if there’s a year or more in between books – I have forgotten much that happened. So I planned on at least rereading the first three books before this one to have the whole series fresh in my memory. That never happened, so I still haven’t read this one yet.

On my TBR since: 2013
Background: Um, although I know that I own this book, I don’t remember what it’s about. Or why I got it. I kind of do remember that I got it either for Christmas or my birthday (I’m guessing the latter. Let’s see whether I’m correct … *opens excel TBR spread* … birthday it is!).

Steffi’s Pick: On the Fence by Kasie West

On my TBR since: 2014
Background: I read West’s The Distance Between Us in 2014 in one sitting and completely adored it. Although I then read and not quite liked Pivot Point (meh) and Split Second (ok), I have bought each and every one of her contemporaries although I have yet to read a single one of those. Looks like I’ll finally get started …

Isi’s Pick: The Song of Achilles by Madeline Miller

On my TBR since: 2015
Background: Victoria Schwab was raving about this one on Twitter, so when I stumbled upon it in my favourite remainder bookshop in Munich I just had to get it. So far, I’ve only heard good things about it. Let’s hope I’ll enjoy it as well!