Diary of a Readingrat
2 comments 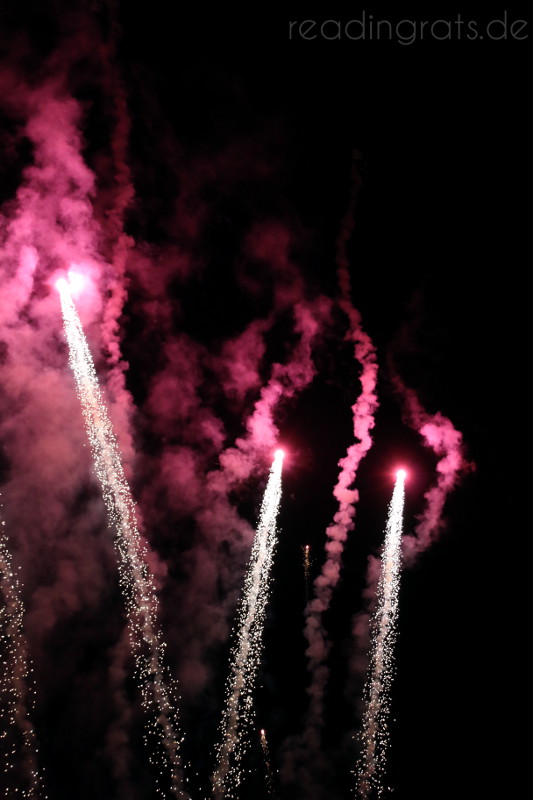 I celebrated New Year’s Eve with a couple of friends and movies, pizza, Singstar, fireworks, and a very long and very fun walk after midnight. It was reminiscent of the New Year’s celebrations I had in my teens. In every way, actually, which means there was some major drama – a simple misunderstanding that grew into a nasty beast. For some reason, I became the intermediary, which cost my mental and thus physical health dearly, meaning I was a total wreck. Somehow, we managed to kill the beast. Unfortunately, I can be quite superstitious, so on my train home a thought crept into my mind: What if those couple of days were a foreboding of what was to come in 2016? What if the year continued that way? Well …

Let’s just say that my year started with the ugly. In January, my aunt and godmother was diagnosed with cancer and died two months later – much sooner than the doctors had expected. It was tough and the aftermath wasn’t much better. Sorting out a whole life isn’t something you do in a day or two – and I wasn’t even that much involved, because I was fighting the bad of 2016.

Wondering what the bad of 2016 was? My constant companion: “Work!” and the resulting stress. I had started my full-time job in January, had been flat hunting for a couple of months before I found something, which took another couple of months of renovating and furnishing, and had to finish my semester in Munich, 200km away. Fortunately, I didn’t have many classes I had to attend left, but I had to study for exams and write papers. So the first two and a half months of 2016 looked like this: work 8h a day, getting to the place I was staying over, having dinner with my host, studying till I went to sleep, sometimes driving to Munich for weekend seminars and exams, spending the other weekends at home, working on my papers. Fun times!

But making it through that didn’t mean I finally had more free time, because by then I really had to start working on my Master thesis. And by that I mean start to think about what exactly I would do. The writing part came much much much later. So I spend most of my time reading books for uni, looking at way too many Instagram pictures and analysing the shit out of them – and then bringing it all together in writing. And because we’re talking about me here, I wrote those 60 pages in … about two weeks? And by that I mean writing about 30 pages over the course of 12 days and then complaining for over an hour two days before deadline on the phone to my sister how much it all sucked, but that it would be no problem to write the missing 30 pages (= half of the thesis) in the two remaining days. As always, I somehow managed to do what might seem to most impossible, finishing just in time (actually, earlier than usual, at 4am with 8 hours left till I had to hand it in).

Unfortunately, I had spent most of my vacation days on that thesis, which meant that I didn’t get any time off afterwards until the week before Christmas. And working in the PR and Foreign Rights department of a publisher also means that you have to (or at least ought to, if you want to do your job properly) read the whole programme. Although I’ve been only working there for a year, I have already read three programmes (Spring and Autumn 2016 and Spring 2017) and a couple of backlist titles (and am currently ‘working’ at Fall 2017) – all in my free time. That’s why I mostly read books from my publisher in 2016 – when I managed to read at all – and also didn’t have much time to blog in-between.

So looking back on 2016, that year was a bitch, especially compared to the two wonderful years I had prior. It was an ugly thing I had to battle my way through. And I did it. I don’t quite know how, but I did, and that is very elating. I never cease to amaze myself. What I also see now: Yeah, I was kind of right. The year did continue “that way” – however not only in the ‘I’m going to completely wreck you’ department, but also in the way I didn’t realise was part of that New Year’s celebration: the ‘You will suffer but also make it through and get rid of all the problems’ aspect.

And then there are the good parts, some small, some big: Fulfilling my dream of working in publishing. Discovering Hamilton, the soundtrack of pretty much most of my year. Getting encouragement packages and post and super-awesome presents from my friends. Having a perfect summer weekend with Crini, Sebastian and Maraia. Shiku becoming my publishing bff [one step closer to our bookshop! Hah!] – and finally meeting her again. The awesome reunion that was Ria’s birthday. Plotting with Bella. Being granted Master deadline asylum at Andrea’s. Getting that freaking Master degree with a grade that topped everything. A superhot summer weekend with Steffi. Going swimming in the river. An amazing short trip to visit Alex in London. Reading time in summer on my mum’s terrace sofa. Our drama queens group chat. Going out with my wonderful colleagues. The feeling of ‘you got this’ after standing in for my colleague while she was on two-week holidays. The Frankfurt Bookfair (it was the most hellish yet, but I can’t help but love it). Having Gandalf and Galadriel finally on my wall where they belong. Baking cookies and watching Fantastic Beasts with friends in Munich. Getting to see Rogue One in English. Having a relaxed Christmas. And I’m pretty sure those weren’t all, I just can’t remember at the moment.

Now it’s 2017 and I’m a little scared of what’s to come. I don’t know yet where I’ll be in six months. Many things might change – and I hate change. And yet, at least my New Year was very relaxed. A good sign? Well, better don’t ask me, because besides being a little superstitious, I also have pessimistic tendencies. Just let’s make the most of it!