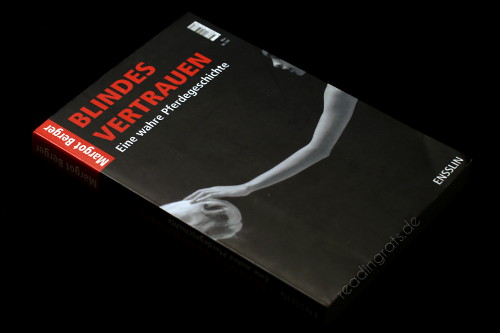 Very simplistic but that’s its charm. Rather unusual, too. However, I’m not sure the proportions match. It seems like a rather long arm, but maybe that’s just because there’s no point of reference. Only issue: Mona’s horse is actually bay, not grey.

This novel is part of a series of books based on true events, which means it is even more emotionally draining on me than the usual book. This novel follows a girl that went blind after a riding accident, which made it really hard to read. Going blind is one of my personal nightmares and one of the things I fear most.

The story begins with Mona leaving the hospital after her accident. She’s depressed, insecure and has given up on life. It is interesting and heartbreaking to follow her through all the stages of dealing with her new situation, getting to know all the aids and tricks. A rather educational read that has one think a lot about the eye sight we take for granted. However, I’d preferred the focus being a little more on her getting back in the saddle. It was a big part of the story, just not as in-depth as I’d hoped for. There’s a lot of fast-forwarding towards the end. I do realise this is important to show her progress, since this does not happen overnight, it just was a little too much crammed into those pages. However, this novel sends a rather clear and inspiring message: No matter what, never give up on your dreams!

I can’t say I liked Mona. Her reaction to her blindness, her refusal to deal with it, to ask for and accept help – over time, it drove me mad. I was annoyed and wanted her to stop whining, because life goes on. Easy to say for me. I’m not blind, which makes my life incredibly unproblematic. However, I could see myself in her. I’d probably react exactly the same way: pushing everyone and everything away and giving up on life. So basically, I disliked her for representing me, because I’d like to think I’d be dealing much better with the situation. The secondary characters, especially Mona’s best friend, were great. Julia’s patience and unwavering loyalty and willingness to help no matter how gruff Mona is, is remarkable. Everyone should have a friend like her.

I’ve tried to ride blind for very short periods of time just to feel more connected to my horse, to get a better sense of the movements, a couple of times. It is just like it is depicted in the book: really hard and scary. If you can’t see where you’re going, you instantly lose your sense of direction which throws you completely off balance. I have huge respect of blind riders. They make it look so easy. 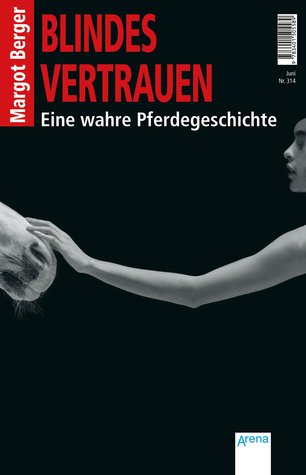