Diary of a Readingrat
6 comments 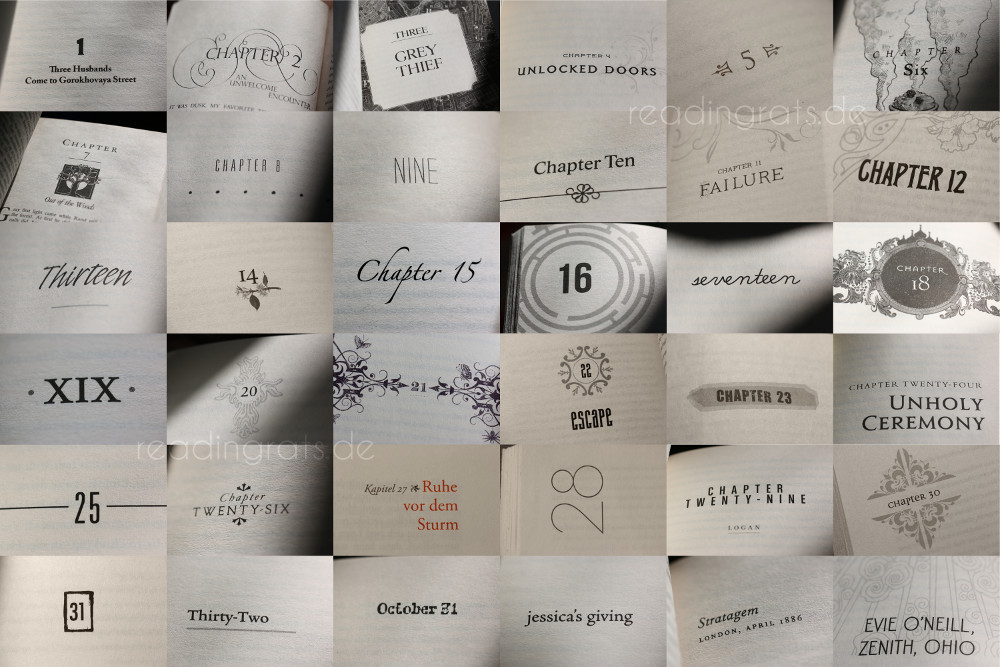 They divide books into delicious morsels ready to be devoured – and sometimes we decide to eat up the whole serving tray in one go resulting in a major hangover with the flavour of our huge disappointment that there’s nothing left. They help us remember where we left off – well, at least those people who have awesome memory. Everyone else lets the good old bookmarks do the remembering. They are wonderful excuses to procrastinate – “Just let me finish this.” – “Only one more.” – we’ve all been there. Sometimes, they make us tear out our hair because they leave off with a cliffhanger and we have to stop to do annoying real life stuff or have to read half the book to get back to this certain point of view – or even one and a half books, in case you’re reading A Song of Ice and Fire. They come in different sizes and even more shapes to look their very best.

When it comes to chapters, I prefer chapter number and heading, and a table of contents is a huge plus, but I can do without it.

So, why am I this particular? Well, it’s really simple: I like to have a number because it’s much easier to refer to a chapter by number. It’s simple, short, and doesn’t take up too many characters on Twitter. Everyone will immediately understand where I am, which doesn’t necessarily have to be the case when using abbreviated chapter headings. And yet, I freaking love headings! If I have to choose between number and heading, I’ll always choose the latter. Why? Because I have a little quirk when it comes to headings: I read through all of them before starting the book. That’s why a table of contents is awesome, but if there’s none, I’ll just skim through the book and read them anyway. There,  I said it.

I guess many of you will now throw your hands up in horror, but let me explain. I read them for two reasons, really: First, I’m just awfully curious and second, I want to get a feeling for the book. These little headings always convey something of the novel’s magic. Sometimes, they make me giddy with excitement, or worried with foreboding. And yet, they are not as spoilery as you might think. I can’t even remember a time a chapter heading has seriously spoilered me. Yes, they give you an inkling of what is to come but they are often so vague that they leave much room for interpretation. It normally takes some reading time to really get what the headings are referring to.

So, have you any preferences and quirks when it comes to chapter numbers and headings?

Deathless by Catherynne M. Valente / Legacy (Legacy, #1) by Cayla Kluver / A Darker Shade of Magic (ADSOM, #1) by V.E. Schwab / Strands of Bronze and Gold by Jane Nickerson/ The Bad Beginning (A Series of Unfortunate Events, #1) by Lemony Snicket

The Eye of the World (The Wheel of Time, #1) by Robert Jordan / The Distance Between Us by Kasie West / Fangirl by Rainbow Rowell / Debutantes (Debutantes, #1) by Cora Harrison / The Goddess Test (Goddess Test, #1) by Aimee Carter / Belle Epoque by Elizabeth Ross

Just One Day (Just One Day, #1) by Gayle Forman / Poison Study (Study Series, #1) by Maria V. Snyder / Grave Mercy (His Fair Assassin, #1) by Robin LaFevers / The Death Cure (The Maze Runner, #3) by James Dashner / Other Words for Love by Lorraine Zago Rosenthal / Shadow and Bone (The Grisha, #1) by Leigh Bardugo

Between Shades of Gray by Ruta Sepetys / Tell the Wolves I’m Home by Carol Rifka Brunt / Wonder by R.J. Palacio / Half Bad (Half-Life Trilogy, #1) by Sally Green / The Night Circus by Erin Morgenstern / The Diviners (The Diviners, #1) by Libba Bray