Top Ten Tuesday is a weekly meme hosted by The Broke and the Bookish.
For more information check out their features page. 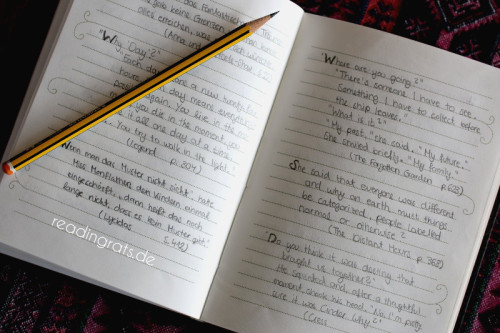 I don’t mark my favourite parts in books. Instead, I either write down the page numbers or take pictures with my phone. Afterwards, I go back and copy the lines in my little black notebook. Currently, I’m a little behind on transferring but I’m trying to catch up. I love browsing through all of my favourite quotes from time to time. It’s like revisiting the books I’ve taken them from; their hearts and souls contained in a couple of sentences.

The following are a couple of random quotes I really like. I don’t really have favourites, well, except for the first one, which is the prologue to my favourite novel. I took the English translation, however, I find it more beautiful in its original German.

“One day,” she said, “I’ll catch dreams like butterflies.”
“And then what?” he asked.
“Then I’ll put them between the pages of big, fat books and press them until they’re words.”
“Suppose there’s someone who never dreams of anything but you?”
“Maybe then we’re both words in a book. Two names among all the others.”

I prefer my history dead. Dead history is writ in ink, the living sort in blood.

I’m just not the type of person who accumulates friends or enjoys crowds. I’m good with words, but not the spoken kind; I’ve often thought what a marvellous thing it would be if I could only conduct relationships on paper. And I suppose, in a sense, that’s what I do, for I’ve hundreds of the other sort, the friends contained within bindings, page after glorious page of ink, stories that unfold the same way every time but never lose their joy, that take me by the hand and lead me through doorways into worlds of great terror and rapturious delight. Exciting, worthy, reliable companions – full of wise counsel, some of them – but sadly ill-equipped to offer the use of a spare bedroom for a month or two.

Destiny is usually just around the corner. . . . But what destiny does not do is home visits. You have to go for it yourself.

“Everyone makes choices in life. Some bad, some good. It’s called living, and if you want to bow out, then go right ahead. But don’t do it halfway. . . .”

If you want something badly enough, it can come true – you just have to make it that way. By believing.

You certainly usually find something, if you look, but it is not always quite the something you were after.

“What about you? What’s your biggest fear?” . . .
“Losing. Failure.”
“Failing at what?”
“At anything. Sometimes it’s hard for me to start something because I’d rather not try at all than fail at it.”
“But nothing good ever happened without risk.”