I decided to participate in this easter special of 7 Days 7 Books, which in a nutshell challenges you to read as many books as you choose (but seven would be nice) in seven days. As a special easter treat, we get an extra day, so it’s actually eight days and you only have to read four novels to take part in the raffle – at least, if you have pledged to do so in advance. Although I trust myself to be able to read four novels over the course of eight days, I decided to go with the other version in which you can choose your own goals.

At the moment, I have fifteen novels on my currently reading shelf and that’s a nightmare. The problem is that I’m experiencing a reading yo-yo effect: one week, I can’t stop reading, the next I don’t feel like reading at all. As a result, I’m starting one book after the other, hoping that one will grab my attention and make me want to read again. Sometimes it works, but the rest just lies untouched and unread on an evergrowing pile. Therefore, I challenge myself to finish seven books from my currently reading shelf over the course of the coming eight days. As of now, I’m planning on doing a diary-esque post each day, but I’ll have to see how that goes. Below you can find the list with the novels I chose – and the reasons why I still haven’t finished reading them. 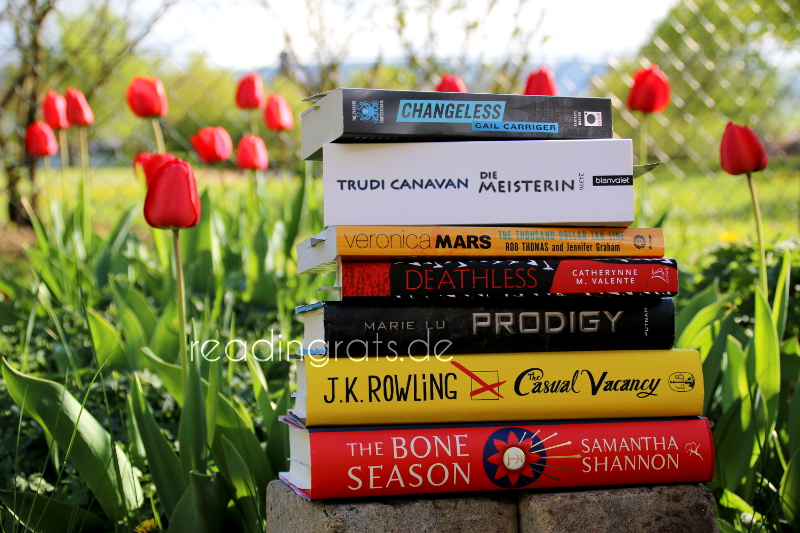 Don’t get me wrong, I do like it to a certain degree. It’s just that it’s not as thrilling as I’d hoped it would be. There are just so many characters and although some of them have pretty interesting storylines, the overall novel is a little bit boring. Unfortunately, it furthermore takes my ages to read. The small print and the large format are not very helpful in this regard.

Deathless, oh Deathless. How much I want to love you and how hard you make it for me. I loved the first part; the folktale elements are wonderful and I do enjoy Valente’s writing style, although it takes a while to get used to it. Then, however, two new characters were introduced in the second part which I just didn’t get at all. Thus, it took my an awful lot of time to get through and when I was finally done with it and could start afresh with the third part, I wasn’t really in the mood.

I started Prodigy immediately after I finished Legend back in November. Unfortunately, I had to put it aside in favour of rereading the Hunger Games trilogy for my bachelor thesis. All in all, it was just a dystopia overload and since I’m not that much into dystopias anyway (poor Katniss, she didn’t come off well in my thesis), I had no interest in continuing.

I marathoned the first two thirds in just two days back in December (Akkarin, Akkarin, Akkarin ♥) – and then I stopped because I had to reread The Hunger Games once again. While writing my thesis, I didn’t want to continue because I was afraid I wouldn’t stop until I’d have finished it. Additionally, I didn’t want to pick it up again because I accidentally spoiled myself – well, something like that. I don’t know exactly what happens but I was stupid enought to read the blurb of the first book in the sequel series and although that doesn’t say anything explicitly, I can put two and two together. I really don’t want it to end.

Everyone was recommending The Bone Season to me and at first, it seemed as if they were right: I love the world and the idea. But then, it began to drag. There are a couple of parts that I find extremely boring, others even annoying, and although things happen, I don’t feel like the story is heading somewhere. And right there, my reading slump set in and I put it down since I wasn’t in the mood for reading anything at all.

Yet another case of “I don’t want it to end!” Just a little backstory: I watched the whole three seasons and the movie in not quite three weeks in March. I LOVE the series! It’s so awesome! Naturally, I preordered the novel and started the day it arrived. It’s great, it feels like just another episode, although it’s slightly irritating that it’s not written in first person. However, I just want to have as much Mars as I can and the next novel won’t come out till autumn. Nevertheless, I think I should just relish it now instead of dragging it with me.

Not much to talk about here. I started it at the end of March and planned on finishing it in April anyway. However, I’m sure I can use the little extra motivation from this challenge.

Well, that’s a lot! However, it could be manageable since I only have to read about 214 pages a day. Still, that’s about twice the number of pages I usual read per day. However, this is supposed to be a challenge so I’m going to try to read them all. It would be incredibly nice for my TBR reduction because all of these seven novels are first reads.  Well then, let’s see how it goes!

Good morning everyone! Well, it’s not like I just got up, I already ran outside to save my tiny shoots that are to become my Irish flower garden from the soft hail. It truly is April now. Before I can start reading, I have to watch last night’s episode of Game of Thrones. Oh, I’m so looking forward to this wedding! It’s going to be great. Afterwards, I will start reading either Deathless, The Bone Season, or The Thousand-Dollar Tan Line. I’m not sure which one it will be but these are the ones I’m more in the mood for.

Why is it so late already?! I haven’t read a single page yet! First, I had breakfast, then my Mum asked me to look into a couple of things on her superslow laptop, and afterwards I finally watched the episode (YAY!) and read the EW recap. That’s kind of my GoT tradition. But now I will start reading and I chose Deathless. The novel is a retelling of the Russian folk tale of Koschei the Deathless set in Stalinist Russia. Very dark and otherworldly.

Why did I ever stop reading this novel?! It’s so wonderful! The writing! The folk tale! The setting – although I have to admit that I don’t know enough about Russian history to get all the allusions. Still, it’s great. I just finished the third part and I will continue soon, but first I have to take that picture before it get’s too dark yet again. Unfortunately, it’s raining so I won’t be able to include the tulips. April truly lives up to its name today. The weather’s changing every couple of minutes or so. So until I check in with you again, here’s a little sample of Deathless.

Hahaha, so much for “no tulips”! Just the second I hit refresh, the rain stopped and the sun came out again so I decided to try to take a picture while keeping my books dry. That wasn’t an easy task, managing a stack of ever-shifting and almost toppling books and taking pictures at the same time. Worst of all, I forgot to include Deathless at the beginning so I had to do it all over again, but here we go. Now you can find the image above. Let’s call this still life Unfinished Novels Bedded in Tulips on an Everchanging April’s Day. And just as I hit refresh, it started raining yet again – but I’m back reading again anyway.

I just finished Deathless and all I want to do right now is to curl up in a ball. It’s so sad and depressing, even more so since it rings so true with all the historical facts underlying the folk tale storyline. It’s so bleak that I’m going to watch the Anastasia animated film right now to flee to an alternate reality in which not everything turned out sad and depressing. She and her family also appeared in the novel which made me incredibly sad. Bah, history is an evil bitch! I actually wanted to check out the updates of my fellow participants but I’m really not in the mood right now, so I’m going to postpone this a little while.

Just finished watching Anastasia and of course I cried my eyes out. It’s so sad that it’s all made up and she was murdered just like her siblings. Still, this is one of my favourite animated films and Once Upon a December is definitely my all-time favourite song from an animated film. So now I’m off checking out the other participants. See you tomorrow!