I really like this one. The composition is fresh, cute, and cheeky. Although the background leans more towards the girly side of which I’m not a big fan, the choice, perspective and positioning of the portrait redeem this and really make the cover an eye catcher.

The blurb had me at Lipizzan. Pretty early on in my riding career, I was introduced to these gorgeous horses. Back then, it didn’t quite work out for me at the stables so I left, but I keep coming back time and time again. Currently, I’m in the enviable position of having two gorgeous Lipizzan mares at my disposal: one’s a true sensitive princess, the other a proper Maestoso fairytale horse and my absolute darling.

The novel begins with a trope and a lovely spin on it: There are new horses arriving at the stable, but not just any horses! Oh no, these two are stunt horses! Protagonist Zoe is not impressed though and that’s what I love about her. She’s worried about their well-being and eyes the training very suspiciously. Soon, however, she befriends the daughter of the owner and starts to find out more about the work with stunt horses. All in all, there’s a focus on natural horsemanship both in training the stunt horses and in solving the issue with Zoe’s pony. It’s a really enjoyable fun read. The end promises quite the interesting second novel and I’m really looking forward to continuing the series.

Zoe is a great protagonist. I really liked her lively personality and the fact she cares so much about the horses. However, she’s a little naive considering she’s been around horses for at least 12 years, which makes her appear much younger than she actually is. I also really love the relationship between Zoe and her mum and the fact they share Filou. That’s something that doesn’t surface much in horse fiction. The parents are usually sidelined even if they’re horse people. Zoe asking her mum for advise and having her an active part of her life was a breath of fresh air.

I also really like the Hungarian family. Maja is such a sweetheart! It’s also great that she’s good in math. There aren’t enough sciency horse girls in horse fiction. Arpad is quite the mysterious, aloof guy for most of the novel but I’m really looking forward to where this is going. Their parents are also really nice and have quite unusual professions.

I couldn’t figure out how old Zoe is. She must be older than twelve, but that’s the only indication there is. Well, it doesn’t really matter, for this is a very basic issue: I really don’t believe she doesn’t know about a horse’s field of vision or sliding stops considering she grew up with her own pony and has a best friend who rides Western. Plus, I’m also surprised she doesn’t really believe one can train horses to be calm in scary situations. I mean, she must know about police horses. I started riding when I was 8 years old and although I never had a horse of my own, I soon became a walking encyclopedia. 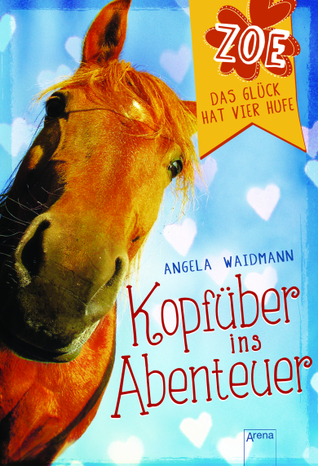