October is one of my favourite months of the year. It’s usually the epitome of what autumn, my favourite season, is all about: sunny days, rainy days, crisp air, creeping fog, colourful leaves, the smell of earth, pumpkin soup, and lots and lots of comfy reading time.

Furthermore, it’s the month of the Frankfurt Bookfair, which is usually the best week of the year. There’s just something magical about spending 5 days surrounded by books, meeting your bookish friends, authors, and in my case colleagues and heading home with countless new books. It’s fun, it’s exciting, and it’s so very very exhausting. But we all love it anyway. I was very busy since it was the second year I was there professionally, so I didn’t manage to visit every single hall. I’m still a little sad they changed the hall system and got rid of our beloved hall 8, which has always been a place of tranquility inbetween the chaos and crowds of the more popular halls. As a result, the stands of the English publishers were like fortresses and one didn’t either run a chance or dare to browse through their shelves. Since I’m terribly lazy, I won’t write a full post. If you want to read more about it and look at tons of pretty pictures, check out Joséphine’s blog.

I also spent a lovely weekend at home. In case you missed it, I come from a tiny town in the middle of nowhere. Said nowhere is gorgeous, though, and my mum and I go hiking whenever I’m home. This time, she dragged me up a rather steep mountain path. It was incredibly exhausting but the view was gorgeous. I also spend time with my (friend’s) beloved horses. I’m currently trying to accustom them to a big blue tarp. I got two of them to walk across it and even managed to wrap them into it. I always wanted to do that!

Then uni started again, which is actually mostly fine because my timetable is hilarious. I’m not even sure how they get away with naming the whole thing a Master’s programme, but I won’t complain as long as I get a job in publishing afterwards. And it’s fun and the classes are great and I actually want to write a couple more posts on my studies but I just don’t know when I’ll be able to do so.

Over the last weekend, my mum came to visit me and we had a nice time together. We went shopping, to an Indian restaurant, to the little adorable theatre that specialises in crime plays, and hiked around Lake Starnberg in the mist – that cleared exactly the second we left the shore because we had to head back to the city. At least my mum got a glimpse of the Alps in the background from the train. 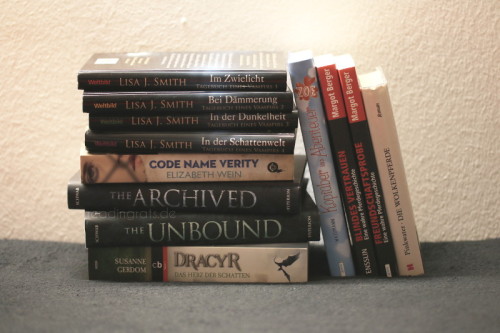