Of Weltbild, Skoobe, and MVB

Maybe you’ve wondered what I’ve been up to this past month. Although I do blog very infrequently, I’ve never been so absent – except for the time I wrote my Bachelor thesis. So, where the hell have I been? Pretty much between the pages of those: 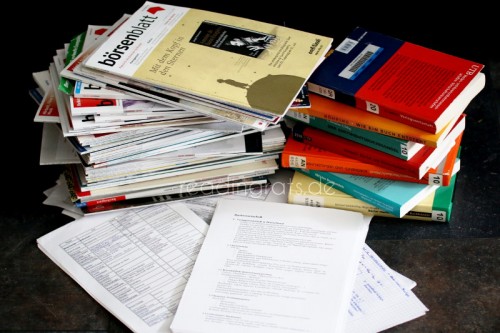 Can I just say how glad I am that I had the crazy idea of subscribing to the Börsenblatt (the official magazine of the association that represents the German book trade) last October after I visited the Frankfurt Bookfair? It saved my life!

I graduated from university in February and for a pretty long time – until the end of March – I’d been planning on doing my master’s in Galway, Ireland. A degree in Literature and Publishing plus Galway and Ireland seemed like a dream come true. However, at some point, I started to have doubts: it’s pretty expensive, the admission process is incredibly complicated and I wasn’t even sure whether the classes would be what I wanted. Still, I had to find the right master programme as soon as possible.

I was desperate when I started googling master programmes that focus on publishing. I didn’t expect to find anything I would be admitted to with my bachelor degree that just happens to be not in book science. But miraculously, there it was: Buchwissenschaft: Verlagspraxis (book science: publishing practice) at the LMU in Munich. Have I mentioned that I always wanted to move to Munich and was heartbroken when I couldn’t find a bachelor programme that suited me?

I immediately started to check it out, went to the information session and everything seemed to be perfect. The courses sound so interesting that I’d love to take them all at once and I would be admitted if I’d pass the aptitude test. The only problem: I had to have a two months internship in the publishing industry to be admitted to the aptitude test. Just let me remind you that it was the end of March and the application deadline was the 15th of July. Not much time to find said internship to fulfil the criterion.

I immediately applied for an internship at the nearest publisher for children’s literature, Arena in Würzburg, and planned to apply to a couple of others. However, I never had to. The very next day, I was invited to an interview, which worked out perfectly and I was able to start working in May. Mission accomplished!

On the 28th of July, after a month of working, studying, and reading Börsenblätter, I went to Munich to fight for one of the 20 places of the master programme I so desperately wanted. I was nervous because I had no idea what I’d have to face. There is a blog that has the questions they used last year but the possibilities are endless. And although the questions back then weren’t simple, they were nothing like the questions I had to answer! Of the about 30 people that attended the test, the first handful left the room as soon as they saw the questions. A couple more gave up soon afterwards. I read the eight questions once, twice, thrice and would have loved to follow the others but I wanted that place, no matter what. There wasn’t a single question I could answer in its entirety and if I hadn’t read sixteen Börsenblätter over the course of the weekend, I would have failed terribly.

In the end, I did my best and still had my hopes up since there weren’t many people who had the same stamina in working with whatever they’ve got. And it was worthwhile. Although we’re supposed to get the results mid-August, I already got an e-mail on Wednesday that I’ll be able to enrol till the end of October because I PASSED THE TEST! Huzzah! It’s like a dream come true.

Maybe you’d like to take a look at the questions I had to answer – roughly transcribed from memory.

Answer one of the following questions on two pages max:

[I picked the Weltbild question. One should think that as a blogger, I would have chosen the second one. Quite frankly, the only campaign I could think of was FJB sending chocolate together with arcs of Bitterzart (All These Things I’ve Done) – because: chocolate! However, that was a year ago. Now I remember a couple of campaigns but I can remember neither the title nor the publisher, meaning they truly didn’t work out for me.]

Please answer all of the following questions: