I Got Tagged #3: My Favourite Literary Couples

Actually, I didn’t get tagged but I saw it on numerous blogs and decided to jump on the bandwagon. You’re supposed to name at least five of your favourite literary couples. I had a list with over twenty but decided to cut back because it really isn’t that easy to find great quotes in novels you haven’t read in the last couple of years. In some cases, I remembered what I wanted and where I could find it, in others I got lucky and just stumbled upon a great quote. So here are my twelve favourite literary couples in no particular order – well, except for the first one because Rhaegar and Lyanna are my absolute OTP. 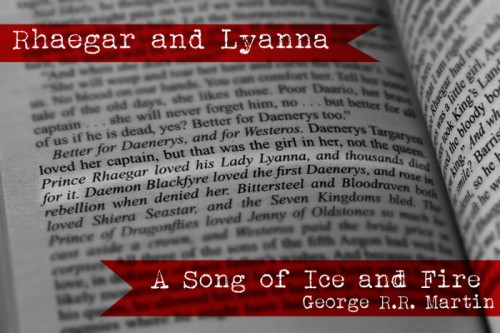 Prince Rhaegar Targaryen and his Lady Lyanna Stark, both dead before their time, dead before the story of the A Song of Ice and Fire series by George R.R. Martin even picks up. And yet, their story is epic and has completely enchanted me. I tend to have an OTP in every fandom but if I have to choose my absolute OTP, then it’s them. I’ve got this lovely image as my desktop background ever since I started reading the series in early 2011. I know that Rhaegar is said to have kidnapped Lyanna but I’m a firm believer that they truly loved each other. That said, I guess it’s almost superfluous to mention that I also believe in THE theory … you know what I’m talking about. 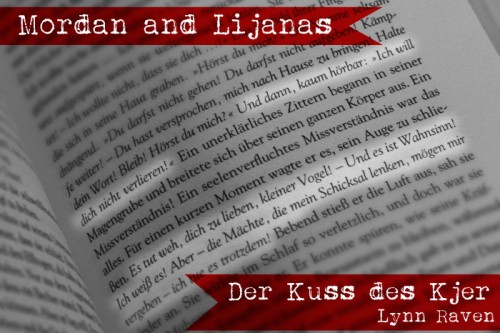 Due to Mordan and Lijanas, Der Kuss des Kjer by Lynn Raven [LT: The Kiss of the Kjer] is one of my all-time favourite high-fantasy novels. They are both strong and complex characters and for the most part, they are driving each other up the wall. Following their story is just so much fun – and heartbreak. The review I wrote is basically a love letter to these two and their epic love story. 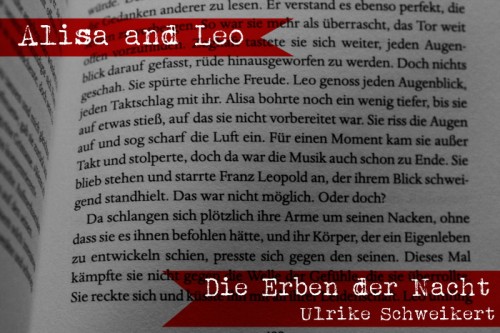 Headstrong, curious and independent tomboy Alisa and stunning, powerful but awfully arrogant Franz Leopold are my favourite literary vampires and so damn cute! Right from the moment they met – and clashed – for the first time in Nosferas, the first installment of the Die Erben der Nacht series by Ulrike Schweikert [LT: The Heirs of the Night], I was totally shipping them. As the saying goes, teasing is a sign of affection and they can hardly spend a minute in each others company without picking a fight. So much fun! 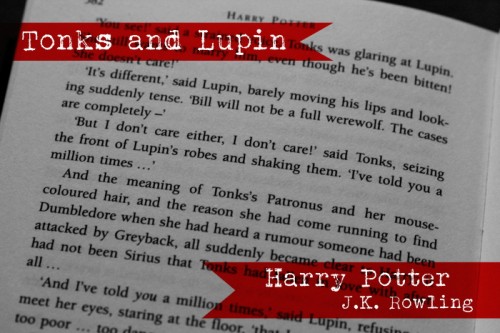 If I have to pick my favourite Harry Potter couple, then it’s Tonks and Lupin. They are two of my favourite characters and I just loved them together. I’ll never get over how J.K. Rowling handled that scene. They deserved something far more epic. 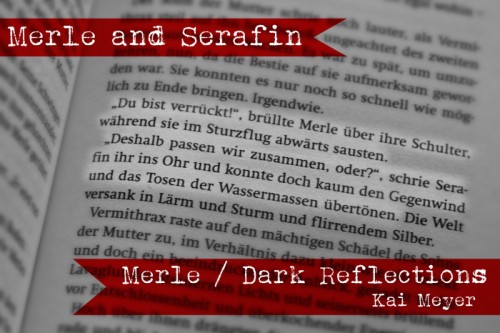 I’m sitting here staring at my screen and don’t know what to say. I’m still aching just thinking about the Merle-Trilogie / Dark Reflections Trilogy, which has a very special place in my heart. It was my first encounter with Kai Meyer and he instantly became my favourite author. If I remember correctly, Serafin was my very first literary crush. I loved him and Merle together, I will love them forever. 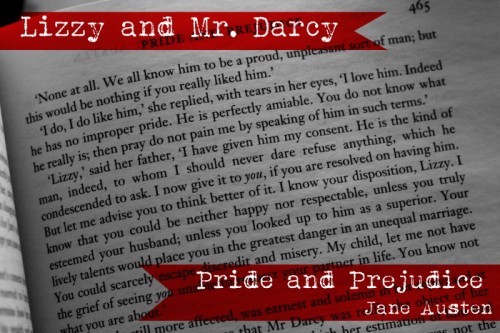 I love Pride and Prejudice by Jane Austen so so sooo much! Since these two are a classic couple, I don’t think they need further explanation. 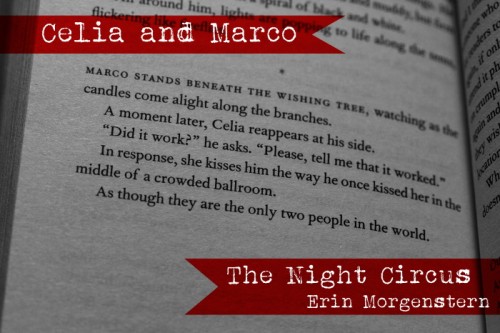 The Night Circus by Erin Morgenstern has completely enchanted me. Deep down I’m slightly obsessed with the world of this novel, the stunning, glamorous and magical Cirque des Rêves. Just thinking about it gives me goosebumps – and all that although I had some issues with the novel. The love story of Celia and Marco was – naturally – magical. I just loved that the attractions of the circus were love letters to each other. So romantic! 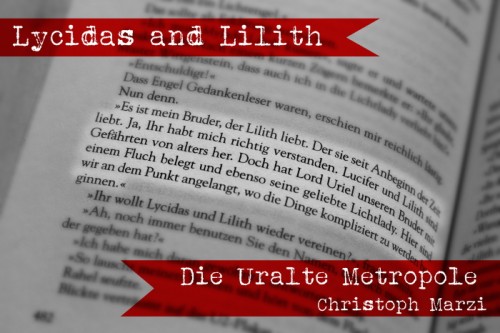 I’m in love with the devil! Lycidas (= Lucifer) is definitely one of my all-time favourite characters. So far, I’ve only read Lycidas and Lilith, the first two installments of the Uralte Metropole series by Christoph Marzi [LT: Ancient Metropolis], and what can I say: I love the titular characters. Lycidas can pretty much charm the pants off you – so much that I still don’t know whether he’s actually evil or not. Lilith on the other hand is quite another character. She appears to be much more evil and yet she loves Lycidas so much that she is willing to give her life for his – in order to save the world. 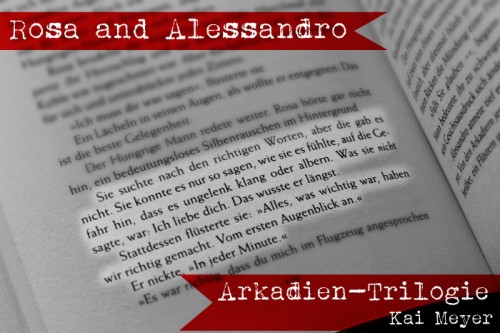 Arkadien erwacht by Kai Meyer [ET: Arcadia Awakens] is still my favourite novel and I adore the trilogy. Rosa and Alessandro’s love story is wonderful and it shows that there does not have to be a forced love triangle to make a romance complicated and interesting. They both come with a lot of emotional baggage and have to figure out their relationship and responsibilities. They fight and disagree and yet always try to protect each other no matter the costs – without pledging undying love to each other all the freaking time. 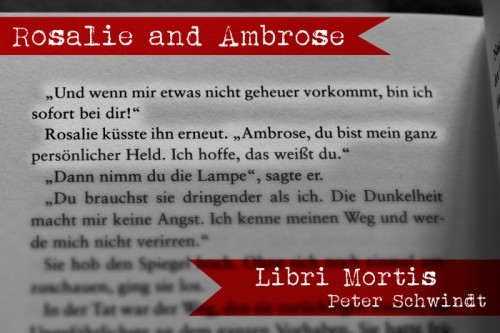 The Libri Mortis trilogy is my all-time favourite trilogy. Rosalie’s story is intense, which makes the love story between her and Ambrose so much more sweet. It is refreshing that the romance never occupies centre stage although it is an integral part to the storyline. The developments just feel natural. 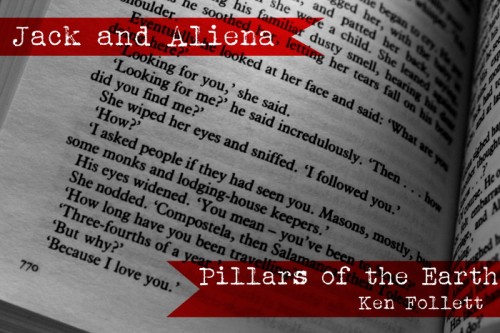 I only read The Pillars of the Earth by Ken Follett because of Jack and Aliena. I saw a youtube video, fell in love with their story and decided to read the novel. Although I also liked many of the other characters, these two were definitely my favourites. Their story is so great and tragic. 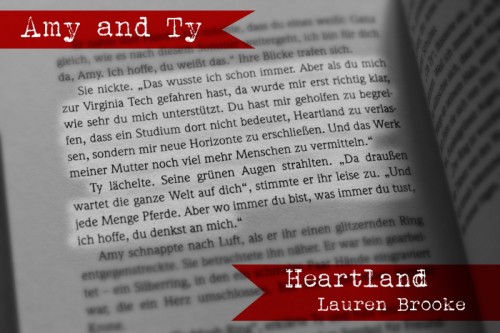 The Heartland series by Lauren Brooke is one of my favourite horse novel series because it’s not all stars and butterflies – horses die and not every competition can be won. Besides, there are a lot of serious issues that are addressed and the characters have to live through a lot. Amy and Ty always seemed like a natural couple since they spent so much time together. However, their relationship also had many ups and downs. Still, the last two awful novels in the series (#21 and #22, which are published as specials in the English speaking world) pretty much messed everything up, which is why I don’t really count them as canon.

There are SPOILERS in the bibliography! Since many couples come from series, you probably don’t want to know from which novel (or page) I took the quotes. It’s basically just to make sure that I haven’t plagiarised anything.