Ever since I started blogging, it’s bugging me that I haven’t taken more pictures of my shelves over the years. I had so many different shelves and a million different arrangements since I feel like I’m reordering my books once a week to fit in all the new additions.

There is only one shelf that’s been with me since the beginning. Yesterday, when I tried to clean up my room but got sidetracked by a stack of photos I came upon in one of my drawers, I found two pictures of this very shelf which were taken in 2004 – 10 years ago. Unfortunately, it seems as if I was only keen on taking pictures of my horse novels so the shelf with the non-horse books is cut and there’s no picture from the top shelf.

It’s fun to see the changes over the last 10 years. The number of books I own exploded, the number of shelves I have, too, and all in all, my room is a little library and the dream of every book lover. However, I will give you the current situation in another post for it would be totally beyond the scope of one post.

Sorry for the bad quality but the scanner messed it up. Klick to enlarge. So here we go: the annotated bookshelf of 13-year-old me! 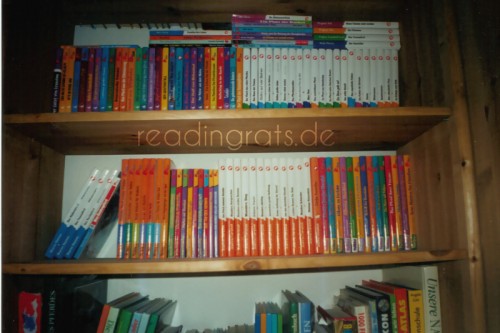 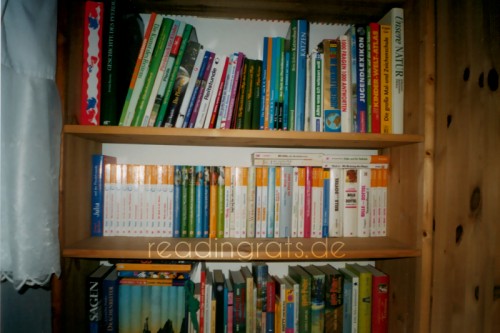 Btw, that white thing on the left is my communion dress and on the lowest shelf are the IKEA slipcases that house my horse magazines (mostly Wendy but also Peggy, Lissy, and Jessy – I’m always wondering why they all end in -y).