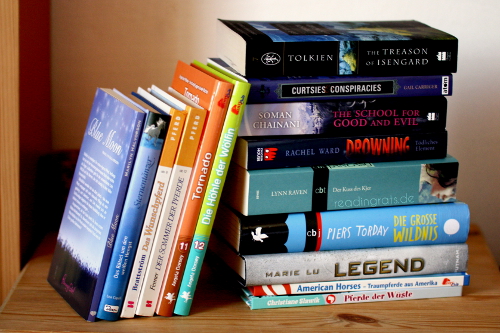 Announcement: I surrender! I’m sick and tired of translating. It’s eating up too much time. I’d rather use my precious minutes writing new posts than translating everything into German. I’m assuming that most of you are perfectly able to read and understand English and of course you can still comment in German. I will still translate the reviews, though, and maybe there will be posts in German only, depending on the context. But for most parts, it’s going to be English from now on. I hope this is ok for you, but I just can’t manage the workload otherwise anymore.

It’s been a very long time since I read over 3000 pages. February, to be exact. This makes November a pretty awesome month for my stats but I also feel bad about it. I shouldn’t have read all those books. Instead, I should have read The Hunger Games Trilogy and a whole lot of companions for my Bachelor thesis. Now I will have to do this in December. God, I think I’m going to panic soon. The only positive thing about the whole process is that Ms Collins seems to have swallowed Goffman’s Asylums and rehashed it as The Hunger Games. She’s pretty much serving me everything I need on a silver plate. It’s going to be a pleasure to put everything together.

So here’s the long list of the books I read in November: