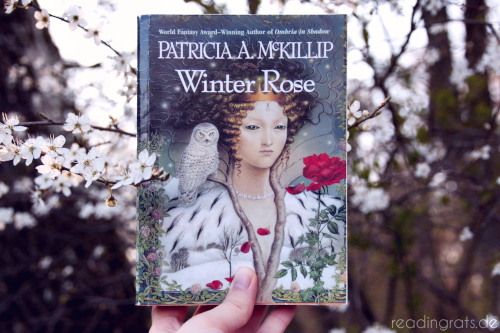 Some said the dying words of Nial Lynn, murdered by his own son, were a wicked curse. To others, it was a winter’s tale spun by firelight on cold, dark nights. But when Corbet Lynn came to rebuild his family estate, memories of his grandfather’s curse were rekindled by young and old — and rumors filled the heavy air of summer. In the woods that border Lynn Hall, free-spirited Rois Melior roams wild and barefooted. And as autumn gold fades, she is consumed with Corbet Lynn, obsessed with his secret past …

This one’s for the dreamers, for the ones loving getting lost in winter woods, for the ones enjoying delicate and thoughtful fairy tales. McKillip once again spins words into a beautiful, tranquil story about magic, curses, faerie realms, and love with only a handful of characters and a limited setting that reminded me a little of Naomi Novik’s more recent novel Uprooted.

Winter Rose first and foremost lives off its breathtaking atmosphere. McKillip’s writing is simply magical. Soft and elusive, like trying to catch hold of mist but only ever feeling its watery breath grasping at nothing. Very tranquil and lyrical yet descriptive and with an undeniable pull. It swallows you up making you lose yourself in it. The icy winter and the sorrow it brings bleed from the pages. I especially loved exploring the woods with Rois; the hidden well, the forgotten mansion, and the glimpses into a different realm. Apparently, it’s a retelling of Tam Lin, but I’m not familiar with that tale so I didn’t recognise it as such and cannot compare these two. Though I can say that it is a very enjoyable tale on its own.

While this novel isn’t particularly action packed, it is still a very gripping read, especially when one becomes smitten with the atmosphere and invested in the characters. However, there were parts I felt its length. I wanted to move on quicker to unravel the secrets. On the other hand, this had me being glued to the pages. The plot is of a limited scale as well but leaves all sorts of doors open. Over the course of the book, I tried several of them coming up with a handful of possible endings and outcomes and I could’ve lived with all of them. The door through which I was ultimately led left me a little frustrated – but in a good way because it wasn’t what I’d expected. It wasn’t tilting to either side of the emotional spectrum and also didn’t leave everything neatly tied into a bow and for that I love it.

I did enjoy this story being small in scale in all aspects. The setting is limited to the Meloir farm, the village, and the woods and there are only a handful of characters of import: the sisters Meloir, their father, Perrin – Laurel’s fiancé -, and Corbet Lynn. I liked the protagonist Rois a lot. I was never quite sure whether she’s a reliable or an unreliable narrator – whether those things really happen or she’s just making them up. I loved her unbridled nature, her bottomless curiosity, her love of the woods and for her sister doing everything in her power to protect her even if that meant hurting herself physically and emotionally in the process. I was also very glad I came to like Laurel. I was a little worried in the beginning I might come to hate her considering the character constellation that is set up but it actually worked out quite well and I felt rather sorry for her. Corbet Lynn was an interesting character, but he was almost a little too aloof for my liking. I could only understand the fascination Rois and Laurel had with him to a certain degree. The truly intriguing parts of his story and character came only in short flashes that were few and far between. Alas, anything else wouldn’t have fitted the general tone of the story so I can’t take much offense in that and I’ll follow Rois anywhere … 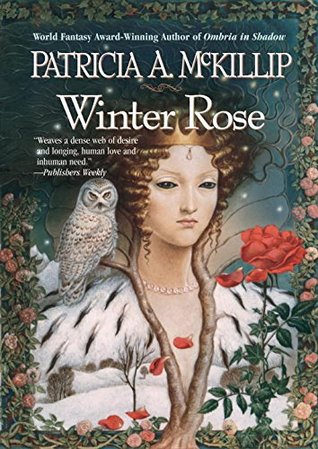