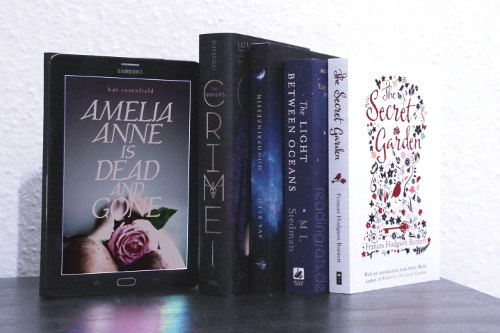 On my TBR since: 2017
Background: I’ve heard of The Secret Garden, I’ve read about The Secret Garden, I haven’t read The Secret Garden. It’s one of those children’s classics that had not even made it onto my shelf. Until this year’s Frankfurt Book Fair, that is. When I saw that lovely cover, I was immeditately drawn to the book, but it took me a second to realise what it actually was. It made me want to have it even more, so here we are.

On my TBR since: 2017
Background: First, I really love the cover. Second, I’m a sucker for everything moon princess related (that’s probably also part of why I love The Lunar Chronicles so much). I’ve got Sailor Moon to blame for that. I was very much in love with Princess Serenity (that dress!).

On my TBR since: 2017
Background: Steffi picked The Winner’s Curse for me in January. It exceeded my expectations, but for once I hadn’t hamster bought all the books of this trilogy. I got books two and three immediately after reading the first one but haven’t continued the series. I feel like I’ve forgotten a lot about the first one already, but I’m really glad I finally have an incentive to continue (not that I need an incentive per se, I was quite enthralled in this world and invested in the characters, but, you know, so many books, so little time).

On my TBR since: 2014
Background: This is one of the books I got in my ebook buying spree back in 2014. I’ve actually forgotten what it is about and had to read the blurb to remind me. I’m not sure whether I’ll still enjoy this one, but it doesn’t sound uninteresting either. I’ll just give it a go.

Isi’s Pick: The Light Between Oceans by M.L. Stedman

On my TBR since: 2016
Background: I found out about this one when I saw the trailer of the adaptation. I probably wouldn’t have picked it up, but I was in the Waterstones Piccadilly desperately hunting for another book for the buy one get one half price offer … what could I do? (Except for making that up. I’m pretty sure my excuse for buying it was that I could go for an additional pair of books for that offer.)