How I Discover New Music #1: Other Lives

Diary of a Readingrat
0 Comments

Ever since I moved out, I hardly ever listen to the radio anymore. I don’t have one, I don’t have a car and when I’m on the computer, I listen to my own music. This means on the one hand I’m horribly out-of-date when it comes to currently popular music, on the other hand I need a new source to find new songs and artists. Said source has been Youtube for the last couple of years. Youtube and living the life of a fangirl. I love watching fan vids about my favourite series and vids about series that might become my favourite series. Sometimes, the fandom, the plot, the editing, and the song come together and create a little masterpiece that makes me fall head over heels for every component. I just have to have that song to be reminded of these couple of minutes of perfection! Other times – when I’m utterly and completely enchanted, when the song truly speaks to my soul – I’ll check out the album. And sometimes, I get even a little more crazy than that …

Until that fateful day, 18 October 2014, I had never heard of Other Lives, an indie rock band from Oklahoma. That day, I opened Youtube and there it was in my subscription feed: Outlander|| Take Us Alive by Shainira. I had been pondering either starting to watch the show or to read the first book, which was already on my shelf. When it comes to series, I don’t really care about spoilers – if I choose to be spoiled and go actively looking for them, mind you! I often check out a couple of fan videos to get a feeling for a series when I’m not sure about commiting myself, so this one was no exception. What I didn’t anticipate was falling so so so hard for the song, but what can I say, that vid, the atmosphere, is perfection (spoilers for the first half of the first season of Outlander – you have been warnded!):

I was immediatelly enthralled. I was drawn in. Not only did it make me start reading and watching Outlander, I couldn’t stop listening to the song. It’s one of those songs that makes me feel strangely elated, that makes me want to completely lose myself in it and let myself get carried away. I also found this very very cool live recording, which is just so wonderfully melancholic:

Anyway, I downloaded the song, listened to Dust Bowl and Dust Bowl III a couple of times, but for about half a year I shouldn’t really think about Other Lives again – apart from listening to Take Us Alive about a million times of course. Until that day in May when I walked to my favourite grocery store, came by a small billboard on a junction box, walked by and stopped dead in my tracks. There it was: a poster that announced a gig of Other Lives in Munich. Although I only new three of their songs, I got awfully excited, grabbed for my phone to take a picture of the poster – and remembered I left it at home. The whole time I spent at the store and the way back home, I was repeating it over and over and over in my head so I wouldn’t forget to check it out as soon as I came home. And that’s what I did and half an hour later I had a ticket to the concert (and another one and a couple of other concerts in mind for the fall and winter season, but that’s at least one other story).

However, when the day drew near, I wasn’t too keen on going. When I get insecure, I try to come up with excuses not to do something although I had been really looking forward to it before. Fortunately, I know myself very well and have learned not to let myself get away with it. So I really pulled myself together and started preparing for the concert athough I wasn’t really in the mood. That’s when destiny came up with a perfect excuse when it decided it would be a pretty good idea to drop the glass salad bowl on my left big toe. The bowl was still intact, the toe not so much. It hurt like crazy (and for the next couple of days I’d think it was broken, which, as it turned out, fortunately it wasn’t). Did I stay at home? Of course not! It takes much more than a possibly broken toe to keep me from fighting myself. An hour later, I was on my way.

Naturally with all the fuss about my toe, I was a little late and managed to walk in the wrong direction after hopping off the underground, but I found my way to the club eventually. At first, I was standing in front of the doors really self-conscious and insecure. Although I’m used to being on my own, I hadn’t been alone at a concert before. But as soon as I stepped through those doors, everything turned to the better. The woman checking the tickets complimented me on my dress (which – and yes, I need to point that out – has a pattern of little black horses on a burgundy ground), the location was gorgeous – Strom is such a nice little snug club – and the people milling around looked terribly hipster, except that this was the real deal and not some people trying to be cool. I immediately felt at home.

First off was the lovely Sara Dee who played half an hour worth of great songs accompagnied by a cellist. I was quite close to the stage, ignored my aching toe and started dancing off – well, dancing as in somehow moving to the music. I just can’t keep still when at a concert. Throughout the evening it really bothered me that so many people stood there stiff as a poker while I was swaying, jumping and moving around. How can you not be moved by music?! That’s something I will never understand. Not that I’m a great dancer. I probably looked positively silly, but who the hell cares. I had tonnes of fun and no one knew me anyway. 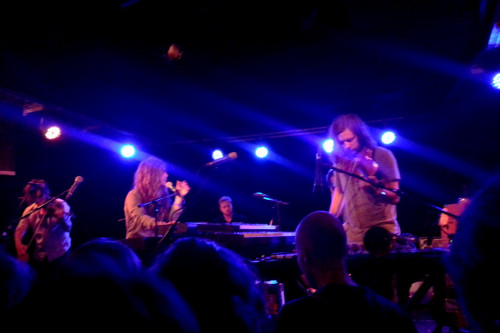 It took at least another fifteen minutes till Other Lives came on. Fortunately, because in the meantime, a lot of people made their way to the bar so that I inched closer to the stage and ended up in third row. The best thing about those small concerts: there’s no barrier in front of the stage, so if you’re in the first line, you’re basically right on stage. When they came finally on, I was ecstatic. I don’t know how many songs they played, I only knew the very last one, which was Dust Bowl III, but it was a wonderful concert. I could really let myself drift in the music. Unfortunately, it was over way too quickly, but I’ll try doing this more often from now on. 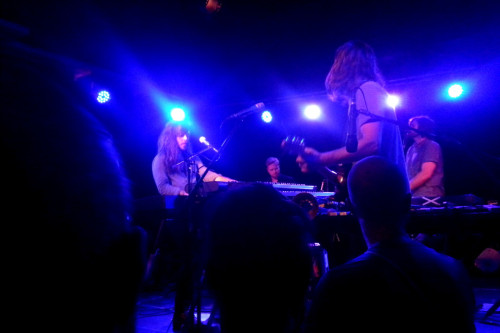 Here’s a high quality vid of one of their gigs. I think these are also the songs they played here in Munich – at least I do recognise most of them. If you’ve ever get a chance to see them, go for it!