I’m so so sorry that I haven’t been able to keep you up to date these past two days. I just wasn’t at home much and therefore also haven’t read much.

I spent more or less the whole day at the stables with my friend who owns four Lipizzans. I’m not a very good rider although I’ve been riding on and off since I was six years old. I’m just incredibly insecure and anxious which isn’t the best premise for riding. However, I’m really trying to get myself together because I just love Arcadia. She’s so cute and looks just like the horses at the Spanish Riding School in Vienna (she’s a Maestoso). The other three are a three generation familiy: grandmother Barona, mother Allegra and son Allegro. 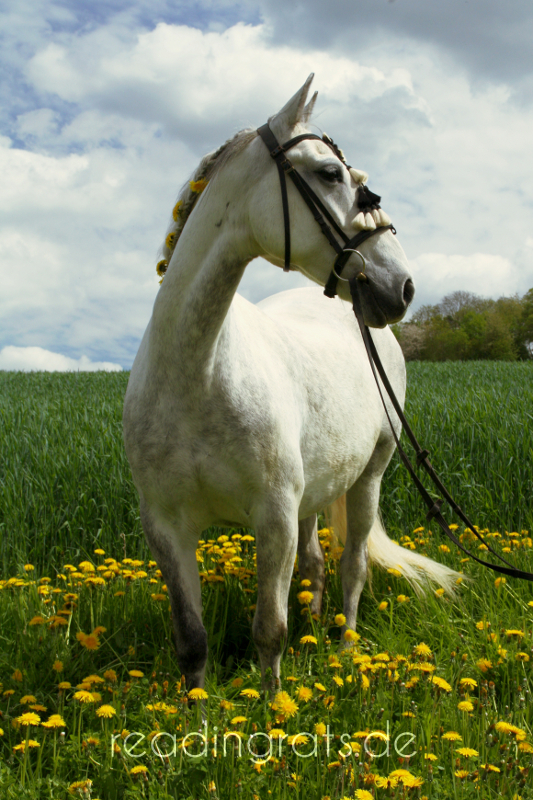 We spend the whole day working at the stables and working the horses (you have no idea how much patience you need to prove to a not quite four year old that the red cavaletto is not going to eat him alive). Except for the picture on the right, we took them last spring (Arcadia is now almost completely white). I also have wonderful pictures with my friend and Allegra in which she’s doing a levade and the Spanish walk but since my friend is in all of these pictures, I don’t want to post them here. 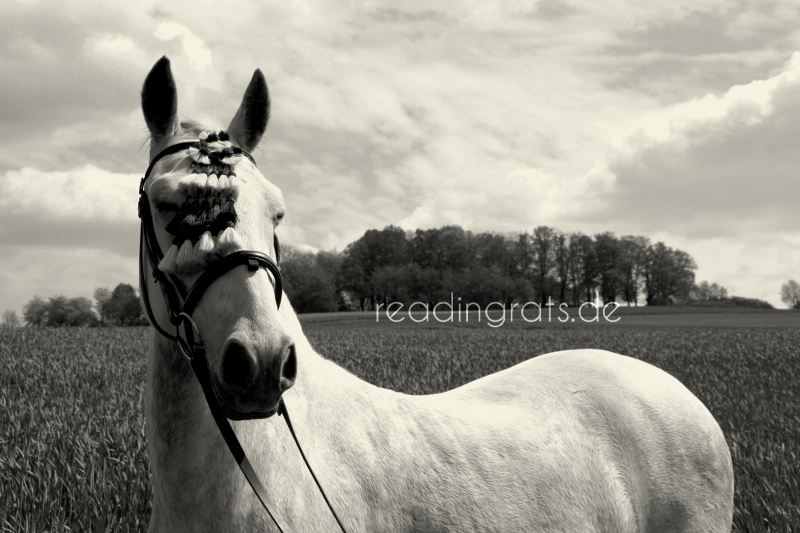 I only managed to read about 70 pages in The Bone Season. I want to like this so much but it’s just not working out for me at all. I feel like there’s a thick glass pane between me and the world so that I’m just the watcher but not right in the middle of the world, if you know what I mean.

I got up around 10, had brunch with my Mum and sister at around 12 and then I was so damn tired that instead of reading, I dozed off. Afterwards, I continued reading The Bone Season before having a heavenly three-course meal at my Dad’s. I ate so much soup that I faltered when the asparagus was served, which is such a shame since I love it so much (probably because you can drown it in sauce hollandaise) but only have it a couple of times because I myself are too lazy to cook it. The dessert was a delicious self-made panna cotta. I wish I could eat it all over again today.

Then, I continued reading the last 50 pages, which were action-packed for a change, which was nice. Unfortunately, I never really felt it. I love the world so much – it is interesting, intriguing and original. The whole idea is brilliant, just the realisation didn’t work out for me. I never felt close to the characters, I never even really rooted for them since they were so distant. I put down the novel halfway through for about a month and when I continued reading, I had no idea who 98% of the secondary characters were. They were just not fleshed out. I really need to write the review as soon as possible before I forget everything that bothered me. I’ve given it 3/5 but that’s almost generous. The more I think about it, the more I’m inclined to give it only 2/5. I don’t even know whether I should continue the series. I want to give it a second chance but I’m already not sure whether I really should do it.

Then, I continued reading Changeless, which is already so much fun. If you haven’t read any Gail Carriger books, you really should check them out. They are wonderful, funny, and sexy. I just met my first crossover from her YA spin-off prequel series Finishing School (which is so adorable and I’d want to say even more fun than her Parasol Protectorate). I read them more or less parallel which is nice since I now know the younger selves of a couple of characters that turn up in the PP. I’m really looking forward to seeing whom I will meet next.

So I just came back from the stables and wrote this post. Now I’m going to spend the rest of the day in bed trying to finish Changeless. That would be nice since that would mean that I read 6 of my 7 planned reads. I also reduced my currently reading shelf by one yesterday by putting one of the novels back on the to read shelf. I’ve started it in the autumn of 2012 for one of my university classes but only read about 100 pages ever since and I can’t even remember the last time I continued. Now I’m down to 9 and feel confident to reduce it to 5 till the end of this month.

Yeah, so much for: “I’m going to spend the whole day reading”! Instead, I fell asleep, woke up with a headache, watched the latest episode of Game of Thrones (OMG, Maisie’s face! So funny! I love this series so so so so freaking much!) and then How to Train Your Dragon, which is so adorable. I want my own Toothless! He’s so superdupercute. But now, I’m really truly going to read!