Did the last novel had somewhat of an ending or did the author leave us hanging in thin air, one hand holding on to the cliff for dear life while we’re biting our nails on the other, trying to persuade our heart to go on beating – even if it’s just a wobbly rhythm? Can we pick up the next one immediately because we forced ourselves to wait until we could read the whole series back to back or do we have to wait a couple of months, a year, or two, or three, or, in case you’re reading George R.R. Martin, forever?

And yet, we wouldn’t want to miss it for the world, would we? All the anticipation, the speculations, the joy of finally holding the glorious next volume in our hands, of finally being able to continue reading – it’s just a part of the whole readingrat experience.

Still, I’m pretty grouchy at the moment because I can’t continue a series I so desperately want to read. And I’m not talking about a book with a publication date that is somewhere in the unforeseeable future like The Winds of Winter. I’m actually talking about a book I’ve had for years. All I have to do is turn my head and there it is, the object of my desire, which is now spitefully winking at me from my reading table, looking all innocent in its white cover. It is delighted that I’m in such a bad mood, that I’m pining after it after ignoring it for so long. I hear it whispering promises into my ear while I’m sitting here, biting my nails, aching to read on, to see what’s going to happen to my beloved characters. Well, serves me right! 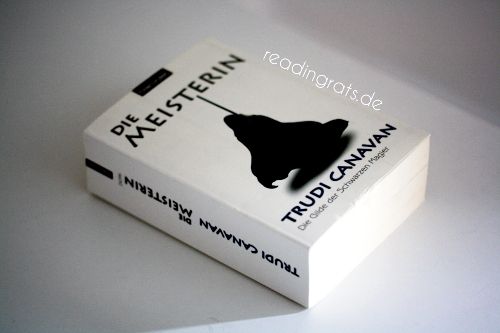 I’m talking about The High Lord (or rather Die Meisterin, since I have it in German), the third volume in Trudi Canavan’s Black Magician Trilogy. I don’t even remember when I got the books; if I had to guess, I’d say it was sometime between 2006 and 2009. I remember that I started the first one once but put it aside after about 50 pages because I lost interest. Then, it’s March 2013 and in comes a dear friend of mine who persuades me to give them a chance. Well, she just knew exactly how to tempt me: she only had to make sure that I’d fall for Akkarin – which isn’t hard since he’s so my type of character. If he’d be as hot as his name … well.

So I read the first one in May and although I liked it well enough, it couldn’t completely win me over – well, except for the very few parts in which Akkarin was mentioned or actually did something. I was so fangirling away! Now I’m almost on my way to Vienna to visit my dearest Silvi and I’d promised her I would read the other two novels. So I started the second one a couple of days ago – and I just couldn’t stop myself. It was so addicting and it got better and better and better (probably because there just happened to be more and more Akkarin in it 😉 ). And that epilogue was fantastic! Gosh, now I so want to read the last one! I already vaguely know a couple of things that will happen from hints I heard or read here and there and because there’s the Traitor Spy Trilogy, which is set 20 years after this trilogy and reading the blurb got my brain working overtime. Now, I just want to read it to know for certain. I want to swoon and cry and … well.

But I won’t. I can’t. Because if I start now, I won’t stop until I read all the 700 pages. Unfortunately, I really really really don’t have the time, since I have to focus on the reads for my bachelor thesis. It also just happened to be a perfect candidate for the holiday readathon in the TBR-Reduction-Challenge. So I won’t. I can’t. Instead, I’m going to sit here, pining after The High Lord Akkarin, trying to block out the whispered promises. I’m sure there are worse things, but right now, it feels like the end of the world.