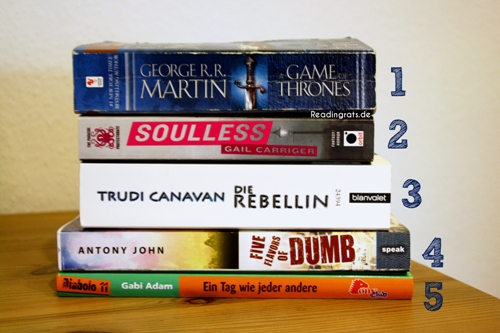 My nice plan of posting regularly is blowing up at the moment. I’m a little stressed out because it’s exam time. I’ve got a lot of studying to do and spend most of the rest of my valued free time on reading. So instead of the June wrap-up that I intended for today, you’re getting the one for May which I had written but forgot to publish. I’m sorry about that. I promise I will give you the June wrap-up at a later point.

May started out great: I read four books in the first week! That blew me away since I hadn’t read much in April. Suddenly, everything seemed possible – even finishing off my whole utopian tbr-list. And then … then I spend two long weekends at home and everything went downhill. It’s the strangest of things, but when I’m surrounded by almost all of my beautiful ~1,300 books, I just don’t get to read at all. There’s a fast Internet connection and four horses that keep me busy. At least I somehow managed to read the book(s) for my fantasy literature seminar but instead of getting back to my list, I spontaneously decided to re-read A Game of Thrones, because we were also discussing it in class and I thought that my memory could use some refreshing. In an act of extreme desperation, I tried to read The Nightmare Affair on the very last day of the month, but I was too slow to finish it in time.